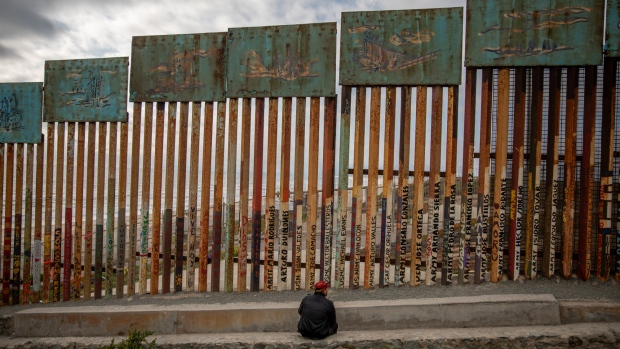 A person sits in front of a section of the U.S.-Mexico border wall in Tijuana, Mexico, on Saturday, May 19, 2018. , Bloomberg

(Bloomberg) -- The U.S. Supreme Court rejected an appeal that said President Donald Trump’s administration is improperly sidestepping environmental and animal-protection laws in its push to build a wall along the Mexican border.

The justices without comment Monday left intact a ruling that cleared the administration to construct two segments of replacement fence and build several border-wall prototypes.

The ruling was issued by U.S. District Judge Gonzalo Curiel, who was attacked by Trump during the 2016 presidential campaign as being "Mexican" and a "hater" who couldn’t be impartial in handling a lawsuit involving Trump University. Curiel, whose parents immigrated from Mexico, was born and raised in Indiana.

In the suit over the wall, groups led by the Animal Legal Defense Fund challenged a 1996 federal law that let the Homeland Security Department waive dozens of federal laws so that border-wall work could begin more quickly. The groups said the grant of authority was so sweeping it violated the constitutional separation of powers.

In rejecting those arguments, Curiel said the waiver authority was a legitimate way to "avoid delays caused by lawsuits challenging the construction of barriers."

The waivers let work proceed on a new 14-mile fence that will stretch east from the Pacific Ocean and a now-completed 2-mile fence in Calexico, California. The new fencing will be as high as 30 feet.

The Trump administration urged the Supreme Court not to hear the appeal. Under the federal law at issue in the case, the groups were required to take their appeal of Curiel’s ruling directly to the Supreme Court, bypassing the appeals court level.

To contact the editors responsible for this story: Joe Sobczyk at jsobczyk@bloomberg.net, Laurie Asséo, Justin Blum