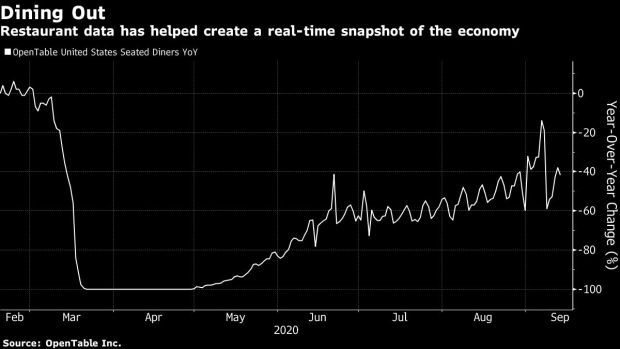 (Bloomberg) -- The alternative data that have illuminated the U.S. labor market, spending and mobility during the pandemic are becoming a permanent part of the toolkit for the Federal Reserve and Wall Street economists.

Previously relegated to secondary status behind established government macroeconomic figures -- most released monthly -- the rapid shifts in activity during the pandemic have made it essential for economists to follow weekly or even daily readings including credit- and debit-card spending, mobility trackers, restaurant reservations and air travel.

As the Federal Open Market Committee starts a two-day meeting Tuesday, central bankers will be reviewing such reports in addition to traditional government data. While hedge funds and other investors have been using alternative data like credit-card spending for years, the tools have become more widespread during the pandemic and in particular are poised to be a lasting part of the arsenal for the economics profession.

In fact, the data are especially useful at times of heightened uncertainty and turning points in the economy -- like now.

“It’s proving to be extremely valuable for a whole range of decision makers including monetary policy makers at the Federal Reserve,” said David Wilcox, who led the Fed’s research and statistics division from 2011 to 2018 and is now a senior fellow the at Peterson Institute for International Economics. “There is no question whatsoever that it has staying power.”

The FOMC in July cited high-frequency indicators as suggesting increases in some consumer expenditures had slowed with resurgence of the virus, according to minutes of the meeting. “What we think of as sort of, non-standard, high-frequency data, that’s become a very important thing,” Chairman Jerome Powell said during a virtual press conference on July 29.

Wall Street estimates of jobs gains and losses early on during the pandemic turned out to be wildly off the mark, underscoring the need for better tracking.

In response, the St. Louis Fed developed its own model estimating employment changes with data from Homebase, a scheduling tool used by 60,000 U.S. businesses and a million hourly employees. Dallas Fed researchers started a Mobility and Engagement Index based on anonymized data from mobile devices, collected by SafeGraph Inc.

The Homebase and SafeGraph data have been instrumental in understanding a recovery that started relatively quickly and has since slowed.

“The need for these data will continue to be strong,” Maximiliano Dvorkin, senior economist at the St. Louis Fed, said in an interview Sept. 1. “Getting a sense of when the economy is switching from an expansion to a recession -- the turning point -- these are very difficult to capture. High-frequency data can help us here.”

“Alternative data was already entering the profession prior to the pandemic, which is now accelerating its adoption. There are many caveats -- government statistical releases are carefully designed for a reason -- which means that in the early going, using alt-data in a more qualitative manner is safer. Over time, certain series will prove more reliable than others, ultimately proving valuable to policy makers as well as market participants.”

The Bureau of Labor Statistics, which produces some of the world’s most closely watched economic reports including U.S. employment and the consumer price index, says the government alone can’t provide all the data and must work with private associations such as trade groups.

“It is our expectation -- high expectation -- that high-frequency data will be in greater demand in the future,” William Beach, the agency’s commissioner, said during a webinar Sept. 1.

Deutsche Bank economist Justin Weidner said traditional data are “great” but “a little bit too slow for the current economy.”

Jennifer Lee, senior economist at BMO Capital Markets, said figures on mobility and restaurant reservations help give economists a clearer picture of what’s going on in the economy between survey periods for traditional indicators.

Alternative data is “telling a more complete story I think of what’s going on out there in the world,” Lee said.

While the pandemic has been a catalyst for alternative data, it’s not the only one. Government agencies including the Fed have said the Internet and modern technology have given them access to vast piles of information that would not have been available more than a decade ago.

“It is tough, demanding work, but the payoff to decision makers is big, and it’s clearly the wave of the future,” said Wilcox, the former Fed official. “Not only is this the future, I’m sure we are only beginning to exploit the power and potential of this alternative information for improving decision making in myriad different lines of work and life.”