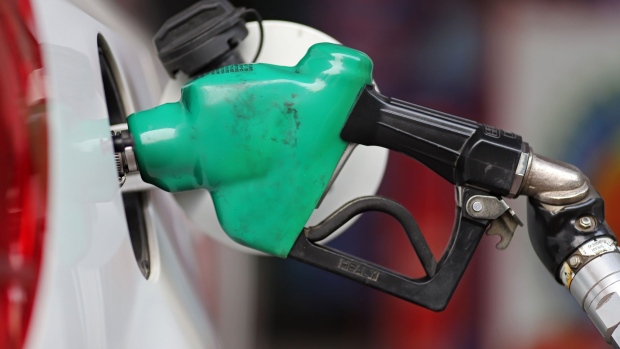 A fuel pump nozzle sits in a vehicle at a Hindustan Petroleum Corp. gas station in New Delhi, India, on Sunday, July 7, 2019. India's new Finance Minister Nirmala Sitharaman resisted calls for a fiscal boost to spur a weakening economy, sticking instead to a plan to narrow the budget deficit over time by keeping spending in check. Photographer: Anindito Mukherjee/Bloomberg , Bloomberg

(Bloomberg) -- Pump prices are so high in India that some of the gasoline and diesel exported to neighboring countries is being smuggled back through porous land borders.

A tanker loaded with 1,360 liters of diesel that was being smuggled to India, where pump prices are at a record, was held last week in the Himalayan kingdom of Nepal, the police said in a statement.

Pump prices of gasoline, which have breached the 100 rupee a liter mark in several parts of India, are the highest in the South Asian region, according to data compiled by GlobalPetrolPrices.com. That’s resulting in illegal trade as Indians grapple with soaring fuel prices. Ironically, Nepal gets all its petroleum fuels from India, which also exports to neighbors Bangladesh and Sri Lanka.

“Smuggling has become rampant as prices are cheaper in Nepal because of tax differentiation,” said Ravi Bharti, who operates a gas station at Adapur in eastern India’s Bihar state, less than 2 miles from the Nepal border. “This is severely impacting our sales.”

While the increase in pump rates is the result of a sharp recovery in the prices of global crude oil, taxes have remained stubbornly high, making up closer to 60% of what consumers pay in India. Prime Minister Narendra Modi and his oil minister Dharmendra Pradhan have been fending off criticism by shifting the blame for high prices on previous governments and production cuts by some oil exporting nations.

Daily sales of gasoline and diesel at his refilling station have dropped to 1,200 liters from 1,800 liters earlier, Bharti said. “Vehicles are now refilling from roadside vendors, who are selling the smuggled fuels much cheaper.”

Modi has drawn criticism for the rise in fuel prices, a politically sensitive subject, not only from his rivals but also from some members of his own Bharatiya Janata Party. India imports 85% of its crude oil requirements, making it the world’s third-biggest buyer.