Canada’s largest private sector union has a message for the country’s employers: Prepare to share the burden of higher inflation.

Jerry Dias, who runs the 315,000-member-strong Unifor trade union, says the era of sub-2 per cent wage gains that’s prevailed in collective agreements for much of the past decade will no longer do in the face of a sharp increase in consumer prices that is swelling the cost of living.

Workers “expect that their wages are at least going to pick up with the rate of inflation,” Dias said this week in a phone interview. “Things are changing. No question about it.”

It’s the sort of big talk expected from a labor leader, but the threat is beginning to ring increasingly true.

Pay is inching higher with average annual wage gains in collective agreements breaking the 2 per cent threshold in the third quarter for only the second time since 2012, according to government data. Wage increases have averaged 1.6 per cent over the past decade.

Recent deals suggest gains are only accelerating. Casino workers in Belleville, Ontario -- a small city between Montreal and Toronto -- just negotiated a 13 per cent pay increase over three years.

Increasing strike activity, meanwhile, indicates organized labor is emboldened at a time when staff shortages are a preoccupation for business. There were 44 work stoppages underway in September, the most in one month since 2018. Only this week, thousands of workers at a Cargill Inc. plant in the western province of Alberta threatened to go on strike just as the price of red meat touches records.

With annual inflation seen hitting 5 per cent in coming months -- a three-decade high -- any escalation of wage expectations in collective bargaining will be closely monitored by policy makers. Canada has a relatively high unionization rate, at about 30 per cent of employed workers, versus about 10 per cent in the U.S. 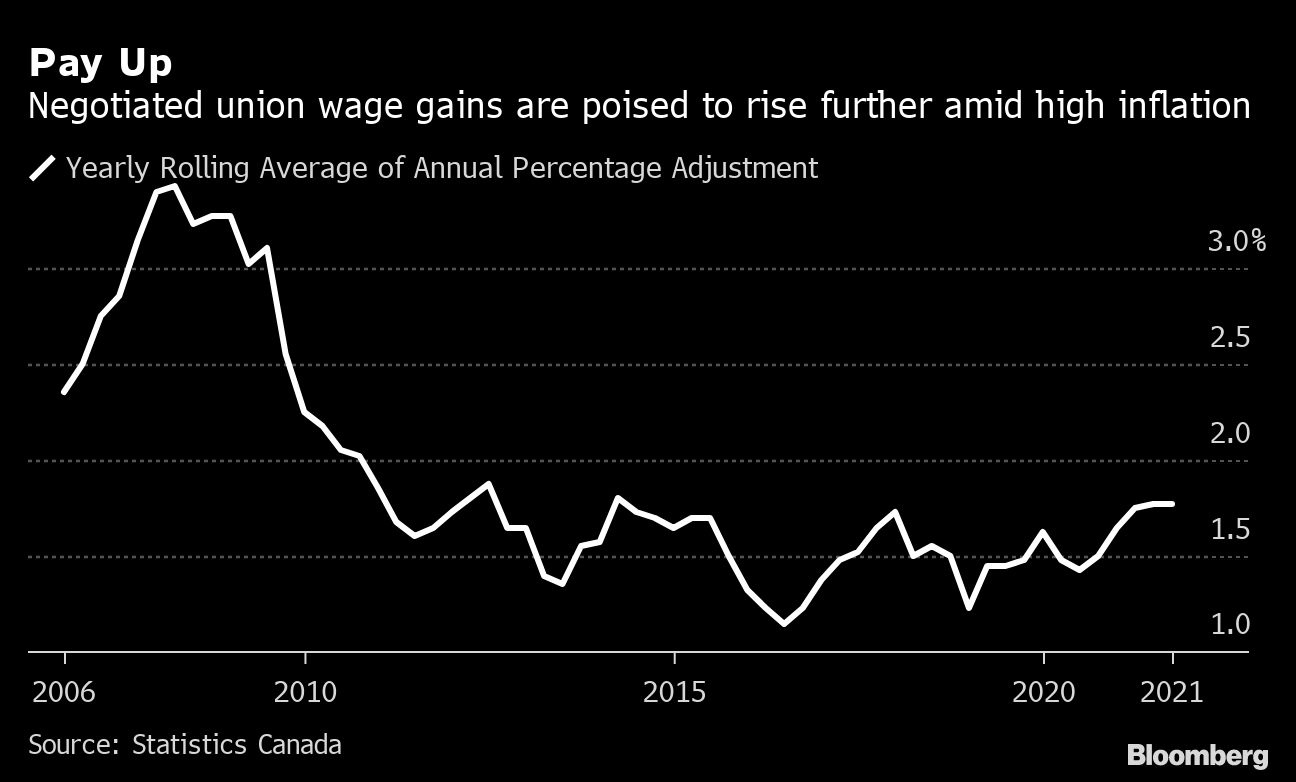 As workers seek to make up for lost purchasing power, the fear is the inflation shock will lead to higher salary demands that become entrenched through automatic cost-of-living adjustments, starting a wage-price spiral that will be difficult to tame. It’s a long-term risk that officials at the Bank of Canada are already clambering to mitigate by assuring Canadians they are serious about inflation.

“We are going to keep inflation under control,” Governor Tiff Macklem said in an interview with CTV News last week.

With the central bank projecting consumer price gains will average 3.4 per cent over the next two years, workers are facing one of the biggest drops in real incomes since the high inflation years of the 1970s. By 2023, officials are projecting inflation will be at a more comfortable 2.3 per cent. But that would still be above Macklem’s 2 per cent target.

Curiously enough, high unionization rates may turn out to be a big help for policy makers in the short-term, acting as a buffer in the fight against price pressures. Collective bargaining is, after all, a slow ship to turn.

Most workers are bound to three-to-five year contracts, meaning they have no immediate recourse to offset higher prices. After decades of quiet on the inflation front made it a non-issue for unions, few of the existing agreements have cost-of-living adjustments.

Bargaining teams also have little recent experience with how to handle -- or even understand -- surging inflation. Often, they are willing to give up some pay gains in return for non-wage benefits.

Workers in the public sector, meanwhile, are negotiating with governments wary of spending more after running record deficits during the pandemic.

All these factors suggest there’s little prospect the current wave of wage agreements will fully compensate workers for any transitory inflation. 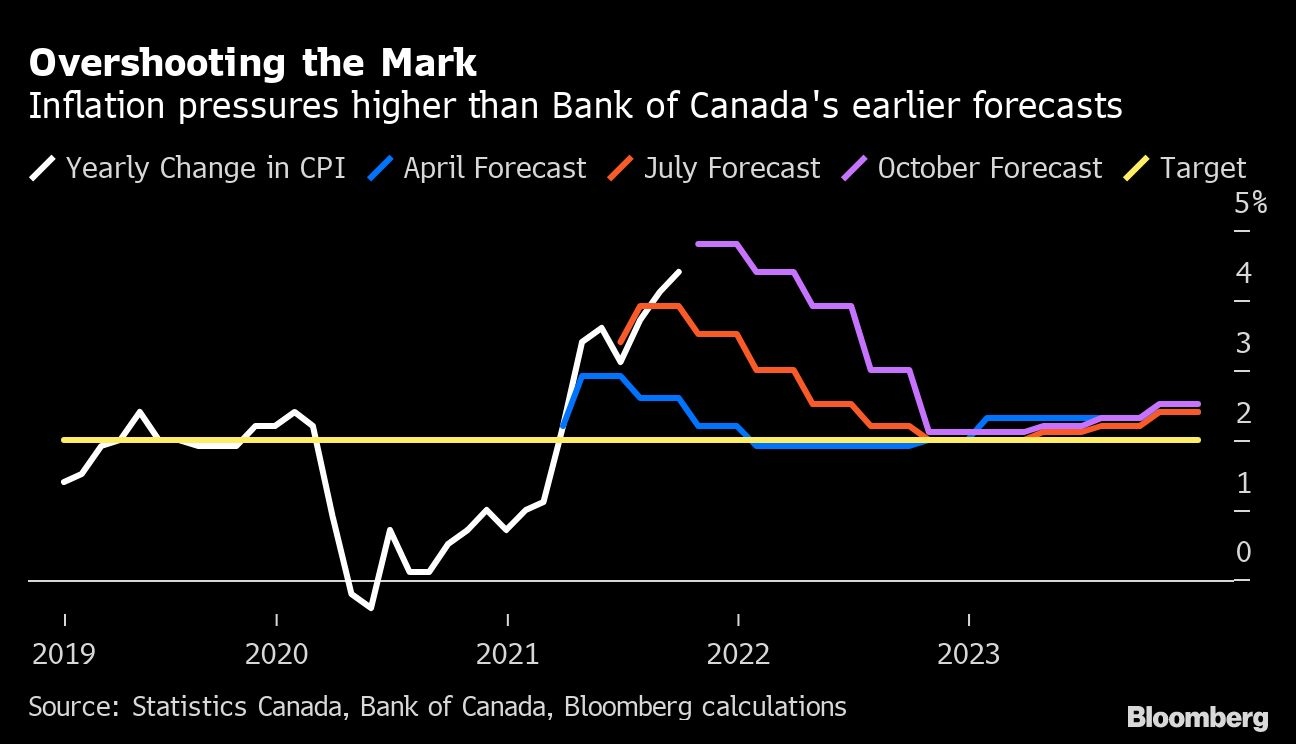 Non-union workers are doing better. Their average wages have grown at almost double the pace of unionized workers, posting increases of 9 per cent over the past two years, according to data from Statistics Canada’s monthly labor force survey.

They say their members are ratcheting up the pressure, bargaining committees across the country are starting to express a renewed interest in negotiating cost-of-living expenses, and union officials are busy coming up with research and strategies.

“Unions are aware we have fallen behind based on the inflation numbers, so we are mindful and our members remind us of it,” said Bea Bruske, president of the Canadian Labour Congress, an umbrella group of unions. “Even though they’ve had wage increase they aren’t keeping up with the hydro bill and grocery bill, and that’s a frequent discussion when it comes to making proposals with employers.”

None of this is lost on the Bank of Canada.

Macklem has been on a public-relations offensive to tamp down inflationary expectations, including hints he’s prepared to start raising borrowing costs early next year. But if labor leaders lose confidence in the central bank’s promises, the support unions are currently providing on the inflation front could turn into an albatross.