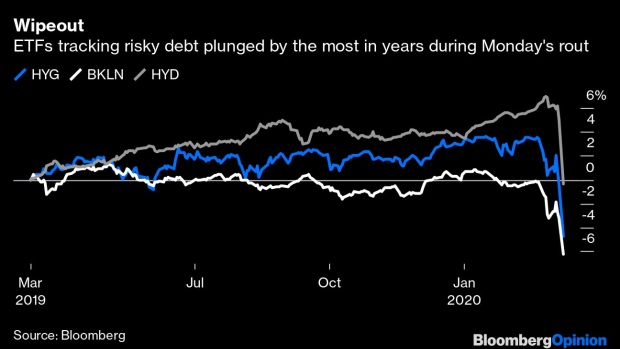 (Bloomberg Opinion) -- Ever since the introduction of exchange-traded funds tracking the riskiest bonds, they’ve been haunted by fears of a liquidity mismatch with the underlying securities when investors stampede toward the exit. And yet, time and again, those concerns have proved to be unfounded.

During the sell-off in risk assets in December 2018, for instance, the largest ETF tracking junk bonds suffered losses but in an orderly fashion, never stumbling by more than 0.9% in a single day. Even in the past two weeks, the iShares iBoxx High Yield Corporate Bond ETF (ticker HYG) took the market volatility largely in stride. So did the Invesco Senior Loan ETF (ticker BKLN) and the VanEck Vectors High Yield Municipal Index ETF (ticker HYD), which respectively are the largest ETFs tracking the leveraged-loan market and speculative-grade munis. Sure, they declined, but never to an extent that raised eyebrows about the ETF structure itself.

Of course, those moves didn’t exactly come out of nowhere. The S&P 500 Index tumbled 7.6% and equities worldwide plummeted in what was nothing short of carnage for global financial markets. But a look at the benchmark indexes tracked by the ETFs suggest that the structure at least partially exacerbated the losses and volatility.

The S&P/LSTA Leveraged Loan 100 Index, for instance, fell 2.84% on Monday in the largest one-day percentage drop since November 2008. But that was still less than the 3.09% decline at the close for BKLN and pales in comparison to the ETF’s intraday low. Similarly, the Bloomberg Barclays U.S. Corporate High Yield Index fell just 3.12%, and the iBoxx USD Liquid High Yield Index just 3.62%, both short of HYG’s 4.3% retreat. And in the biggest deviation from expectations, the Bloomberg Barclays muni high-yield index that HYD tracks fell just 0.86%, compared with HYD’s 5.1% plunge.

To be fair, many funds will have some margin of tracking error with their benchmarks, especially during volatile trading days. The $77.8 billion iShares Core U.S. Aggregate Bond ETF, ticker AGG, had some trouble, for instance — its price fell 0.13% compared with a 0.35% gain for the Bloomberg Barclays index it tracks. And the SPDR S&P 500 ETF Trust dropped 7.81% while the S&P 500 itself declined just 7.6%. Those are small enough differences to even out over the course of a few trading sessions.

It’s harder to explain away the deviation among the high-yield ETFs. Speculative-grade muni bonds, in particular, are notoriously idiosyncratic and difficult to move in bulk during turbulent market conditions. When trading is calm, the bonds glide higher. And so does the ETF: In 28 of the first 34 trading days of 2020, HYD and its index moved within 10 basis points of each other. On days like Monday, 10 months of price appreciation can disappear within six-and-a-half hours as market makers slash prices on low-rated health-care systems and senior-living facilities.

The high-yield corporate bond ETF has had several days like Monday in which its losses exceeded its benchmark, or vice versa. But it, too, tends to project steadiness during boom times. From Oct. 3 through Jan. 24, a period marked by steady positive returns, the ETF deviated only once from the underlying index to the extent it did on Monday.

Whether the sell-off continues unabated is an open question. U.S. equity futures soared in overnight trading Tuesday on bets that fiscal stimulus would stave off the worst-case economic scenario from the coronavirus outbreak, and the S&P 500 was up 3 percent in early trading. Each of the ETFs tracking risky debt opened higher. Crucially, global primary markets began showing signs of life for some bond issuers. These are hardly favorable conditions for the riskiest corporate borrowers, with high-yield spreads the widest in four years and double what they were just two months ago, but at least there’s a hint of an opening on the horizon.

Buyers of high-yield ETFs will just have to accept that there will be days like Monday. The funds have demonstrated that they’re not going to blow up spectacularly like H2O Asset Management or Woodford Investment Management. But there might still be some fireworks along the way.