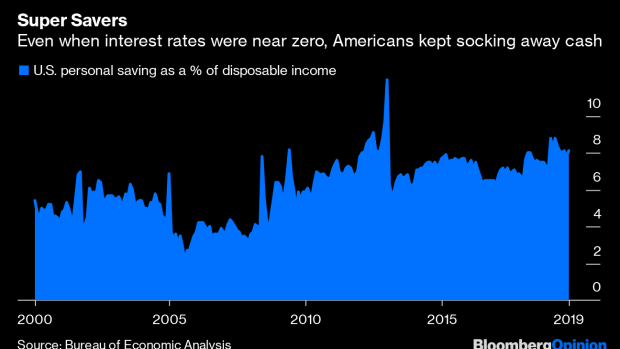 (Bloomberg Opinion) -- Before the financial crisis, the term “high-yield savings account” would have been considered an oxymoron.

Today, such products are thriving. After the Federal Reserve dropped its benchmark lending rate to near-zero in late 2008, big U.S. banks paid virtually nothing to anyone who parked money with them. That presented an opportunity for new, mostly online entrants to swoop in and offer much more. After years of getting zero, customers viewed a 2% interest rate with backing from the Federal Deposit Insurance Corp. as a bonafide steal.

Their popularity only grew as the Fed raised interest rates. Even Goldman Sachs Group Inc. got into the game in 2016 with its consumer bank under the brand Marcus. Higher yields fueled the online cottage industry that tracked the best interest rates available each month. A quick search of “best savings account” includes articles updated monthly from NerdWallet, Bankrate, the Balance, SmartAsset and LendingTree’s MagnifyMoney, among others.

Fast-forward to the present. With the Fed having cut interest rates twice since the end of July, and possibly lowering them again this month, it’s hardly surprising that these savings accounts have adjusted lower as well. Yet it’s almost comically difficult to find how the various savings rates have changed over time because the entire online ecosystem updates so frequently. One of my editors told me the rate on his Marcus account fell to 1.9% on Oct. 4, the third time that’s happened since he opened it in March.

Clearly, no two banks reacted to the change in Fed trajectory quite the same way. Goldman Sachs’s Marcus and Barclays Plc, for example, clearly anticipated interest-rate cuts and gradually lowered their savings rates ahead of the central bank’s announcements. Ally Financial Inc., by contrast, slashed its rate by 30 basis points in the week after the Fed’s July rate cut. Colorado Federal Savings has only had to drop its promised interest rate once since March because it remained comfortably below the fed funds rate. And then there’s HSBC Holdings Plc’s HSBC Direct, which stubbornly kept its rate elevated until this week, when it made a 25-basis-point reduction.

At this point, regardless of the past several months, each bank is running out of room to maneuver after the Fed’s persistent rate cuts. Barclays, as of the most recent Bankrate data available, is offering just 2 basis points less than the upper bound of the fed funds target rate. Marcus was in a similar bind for a couple of weeks but swiftly lowered its rate by an additional 10 basis points. HSBC, for now, seems determined to offer higher rates than the competition, though by a shrinking margin.

Obviously, the terms of these savings accounts allow for changes to interest rates at any time. With 10-year Treasury yields at 1.66%, it’s simply not sustainable for banks, even those without brick-and-mortar locations, to offer the same payouts they once did.  Some institutions that require high minimum opening balances still offer juicy rates, like 2.4% at Popular Inc.’s Popular Direct, but those seem destined to fall eventually.

To be sure, it could be a lot worse for American savers. In Europe, a growing number of German banks are passing on the region’s negative interest rates to their customers as costs become too high to bear. Bigger lenders like Deutsche Bank AG and Commerzbank AG have signaled they’re warming to the idea as well.

All of this serves as a backdrop for the Fed’s interest-rate decision on Oct. 30. Wall Street is convinced that after a wave of weak economic data, the Fed will lower rates yet again, even though Chair Jerome Powell has insisted the central bank is not on a preset course and minutes from the central bank’s September meeting revealed that policy makers are sharply divided about the path forward. While Chicago Fed President Charles Evans said he “wouldn’t mind another cut,” notable hawks Kansas City Fed President Esther George and Boston Fed President Eric Rosengren said further lowering the fed funds rate isn’t justified yet because consumer spending, which accounts for 70% of the U.S. economy, remains so strong.

If the post-crisis era has taught markets and economists anything, it might just be that lower-for-longer interest rates don’t necessarily get people to raid their savings and spend. Rather, it might be just the opposite — without any hope of earning anything on what they save, consumers may decide to hoard additional cash for a rainy day or to meet their retirement goals. Since mid-2005, the U.S. personal savings rate as a percentage of disposable income has generally trended higher, to about 8% from as low as 2.2%, according to Commerce Department data.

Given that U.S. consumers appear to be one of the few bright spots in an otherwise slowing global economy, the Fed should be careful not to make any moves that would slow their momentum. Certainly, one more quarter-point rate cut isn’t going to suddenly break Main Street. According to the latest data from the FDIC, retail deposits at the nine largest institutions increased by more than 2% from a year earlier, to $5.2 trillion, even though more than one-fourth of deposits pay no interest. In other words, many patrons of big banks have become accustomed to getting paid nothing on their checking or savings account balances.

And yet, if enough savvy savers become convinced that the Fed will abandon its projections and drop interest rates at just about every meeting, it’s easy to envision a scenario in which money that would have gone into high-yield savings accounts instead gravitates toward fixed-rate bonds or certificates of deposit to lock in a reliable stream of income. That sets up an additional hurdle for those consumers to access their cash and spend to keep the economy afloat.

Powell has long said that the central bank will act as appropriate to sustain the economic expansion. Lately, that’s meant cutting interest rates at every turn, to the delight of stock markets. But the Fed would do well to spare a thought for savers as well. It’s easier to spend when it’s clear how much interest your bank account will pay tomorrow.