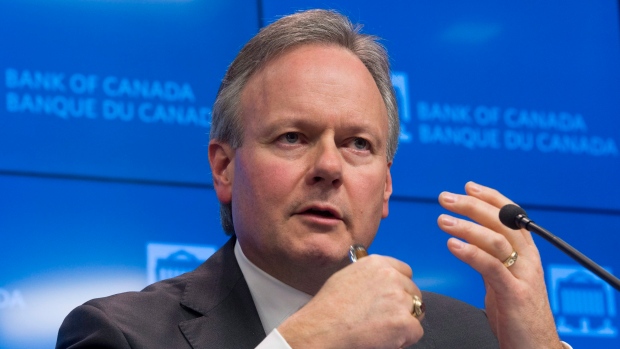 Bank of Canada Governor Stephen Poloz responds to questions during a news conference in Ottawa, Wednesday January 17, 2018. , The Canadian Press

OTTAWA -- The federal government's steps to amass more public debt have helped Canadians avoid an even faster build-up of their personal debt loads, even though such household burdens have still managed to hit historic highs, the Bank of Canada governor said Tuesday.

Stephen Poloz said Ottawa's spending in the last couple of years on programs such as enhanced child benefits and infrastructure, have contributed to economic growth.

The extra public investments have also helped push interest rates up to a level higher than they would have been without the government stimulus, he said.

From there, those higher rates have helped slow the accumulation of household debt and, while it's still climbed to record levels, it's lower than it otherwise would have been had Canada continued with government belt-tightening approaches of the past, Poloz said.

"It's always hard to imagine the counterfactual, but if rates had to stay lower for longer that would mean more household debt -- and the federal government has accumulated some fiscal debt instead," Poloz said as he responded to questions following his speech at Queen's University in Kingston, Ont.

"And I think that's a trade-off that, of course, you have to make in policy-making space."

All things considered, Poloz added that this "mix has worked better for the economy than the old mix."

He said he didn't want to comment on the merits of specific fiscal policies of the past. But he noted the current approach has helped guide Canada's economy closer to reaching its full capacity, or "home," as Poloz calls it.

His remarks come a couple of weeks after the Trudeau government tabled a federal budget that has faced criticism for its plan to continue running annual multibillion-dollar deficits across the five-year projection horizon -- despite the country's surprisingly strong economic performance.

The government opted to use billions of dollars worth of fresh fiscal space for new investments, a decision that left it with no timeline to return to balance.

Finance Minister Bill Morneau argues the new spending will lift long-term growth and insists his earlier investments have already produced encouraging economic results. Morneau has also made efforts to reassure the public that the new commitments will be carried out in a responsible way.

In response to a journalist's question, Poloz said Tuesday he agreed with the view consumers are now facing high debt loads because that took over a debt-accumulation void left by governments. Many governments shifted to austerity mode once they had shut down the massive stimulus measures put in place after the 2008 financial crisis.

"Because we were in a place where the economy was facing significant head winds, downward shocks, somebody was going to accumulate some debt if we were to keep the economy closer to full employment," Poloz said.

He said household debt has been one of the central bank's top concerns for quite some time and it's figuring prominently in the list of issues he's watching closely as the economy adjusts to higher rates.

The bank estimates the economy may be as much as 50 per cent more sensitive to a given rate of interest than it was about a decade ago, he added.

Still, despite record levels of household debt, he said default levels remain very low and the system is performing well.

Citing trade-policy uncertainties, such as those related to the United States, the bank held off moving its trend-setting rate last week. It has hiked the benchmark three times since last summer thanks to a stronger-than-expected economy.

"Even I don't know when interest rates may go up again," Poloz said.

"That's because we're truly dependent on the data as they evolve in the economy because that will help us in real time to understand where we really are relative to what I call home."