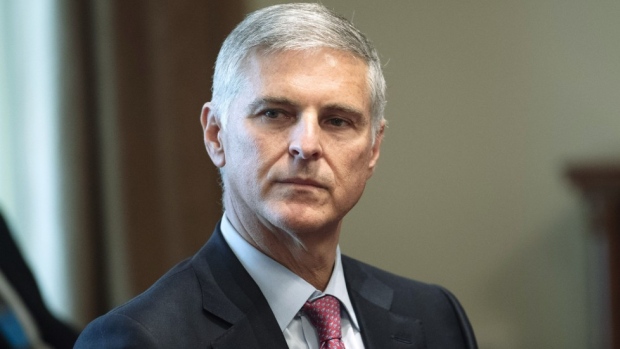 Christopher Nassetta, chief executive officer of Hilton Worldwide Holdings Inc., listens during a meeting with tourism industry executives and U.S. President Donald Trump, not pictured, at the White House in Washington, D.C., U.S., on Tuesday, March 17, 2020. Nassetta says he expects to see worldwide occupancy rates at 10%-15% because of the coronavirus pandemic. , Bloomberg/UPI/Kevin Dietsch

Hilton Worldwide Holdings Inc. Chief Executive Officer Christopher Nassetta came out of a quarter in which revenue fell 13 per cent from the prior year with a grim prediction: Things are going to get a lot worse.

In April, revenue per available room, a measure of pricing and occupancy, declined 90 per cent across the company’s 6,100 hotels, as travel bans and timid consumers hammered lodging businesses globally.

Industry data show U.S. hotel demand began plummeting in March and bottomed out in April. It’s still anemic, and could remain so for months, if not years.

“Given the timing of the pandemic, we expect a much more dramatic impact on our second-quarter results,” Nassetta said Thursday on a conference call with analysts. “A full recovery will take time and it could take several years to return to the hotel demand levels we experienced in 2019.”

The pain has been widespread. Hotel companies including Marriott International Inc. and Hyatt Hotels Corp. have raised billions in bond issues and loyalty-points sales as they gird themselves for a long recovery. They’re also aligning themselves with public health experts and household cleaning brands in an early bid to convince travelers that their properties are safe.

In the U.S., where most of Hilton’s hotels are located, occupancy rates have been hovering below 30 per cent, according to data from STR, and nearly 70 per cent of lodging workers have been furloughed or laid off.

Hilton, which has suspended operations at 16 per cent of its hotels, managed to post adjusted earnings per share of 74 cents  U.S. for the first quarter, below the company’s pre-pandemic guidance.

That looks good compared to Hyatt, which reported a loss in results announced May 6. Roughly 35 per cent of the company’s hotels were closed as of April 30, with occupancy rates running around 15 per cent at the properties that remained open.

What comes next will depend on the pace of pharmaceutical research and consumer appetites for risk as the first wave of the coronavirus recedes. STR data already show a modest rebound in beach destinations people might drive to, like Galveston, Texas, and Daytona Beach, Florida.