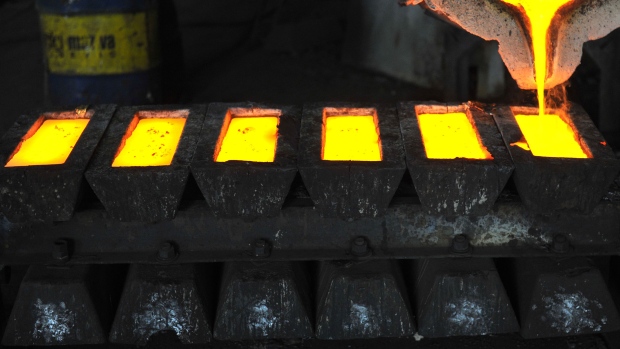 Liquid brass - a mixture of copper and zinc - is poured into moulds in the foundry at the copper mining and smelting complex, operated by RBT Bor Group, in Bor, Serbia, on Friday, Aug. 24, 2012. Copper declined, trimming a third weekly advance, on concerns over the progress in solving Europe's debt crisis, disappointing U.S. data and further tightening measures in China's property market. Photographer: Bloomberg/Bloomberg , Photographer: Bloomberg/Bloomberg

(Bloomberg) -- Zinc prices will continue to trade at elevated levels as increasing energy and raw material costs curb production at some smelters and demand grows, according to India’s biggest producer.

In the meantime, “demand for zinc has to go up as more and more governments across the globe are putting focus on the basics of politics --which is on infrastructure, roads, railways and bridges,” Misra said. The metal is used to galvanize steel, which is the backbone of construction.

Base metals have had a spectacular start to 2022, with the London Metal Exchange’s LMEX index rising to a record last week amid tight supplies and higher energy costs. The three-month zinc contract is up nearly 40% in the past year to $3,575 a ton. Companies like Hindustan Zinc are trying to cut costs by curbing usage of coal, a key input.

“As coal prices go up, we need to move away from coal and rely more and more on renewable sources,” said Misra, who is also chairman of the International Zinc Association. Hindustan Zinc aims to move entirely to renewable sources for its power consumption by 2030, he said.

The company has earmarked $1 billion over the next five years to make its products greener, he said.