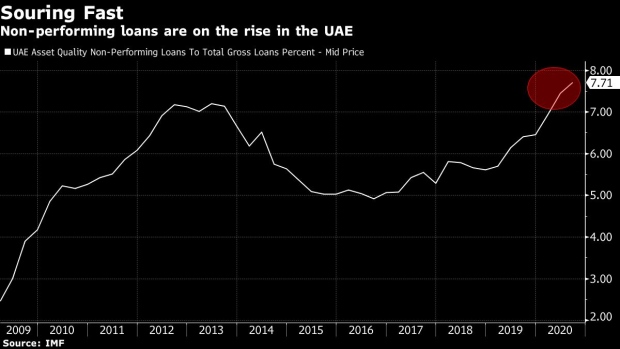 (Bloomberg) -- The world’s biggest restructuring firms are boosting their presence in the Gulf region, anticipating a spate of turnaround work as companies succumb to the coronavirus pandemic after years of economic pain.

New York-based Alvarez & Marsal Inc., which worked on the Lehman Brothers Holdings Inc. bankruptcy, has already added three seasoned professionals to its Middle East team this year. The hires are part of an effort to expand to about 150 in the region over the next three to five years from just 10 in 2015, according to A&M’s head for the Middle East, Saeeda Jaffar.

Other specialist firms have also beefed up their presence in the region.

“Every business in the region needs to look at both their operating model and financing model as the world has changed for us all in the past 12 months,” said Clarke at Duff & Phelps. “So the opportunity for restructuring and transformation professionals is extremely strong.”

Even before the pandemic rippled through the region, the industry was becoming a magnet for talent in the wake of a number of high-profile corporate scandals. Disruptions caused by the disease added strain to economies already under pressure from a downturn in the oil market, resulting in mass job losses and a spike in bad debt.

Although emergency measures have helped contain the damage, businesses are on edge now as authorities look to phase out support this year.

Restructuring as a business practice has long struggled to take root in the region, where state and private operators prefer to settle complex debt issues outside the public eye and because of the cultural stigma attached to failure.

Many countries also lacked an adequate bankruptcy framework for companies to work out their difficulties with creditors.

As a result, several high-profile corporate failures -- Abu Dhabi construction group Al Jaber or the dispute between Saudi Arabia’s Ahmad Hamad Algosaibi & Brothers and Saad Group -- are still not resolved after more than a decade.

At stake are billions of dollars of debt extended by international and local banks, a large chunk of which stems from Dubai’s property crash and financial crisis in 2009.

But in recent years governments from Abu Dhabi to Riyadh have stepped up efforts to attract more foreign investors. Insolvency regimes that have emerged as a result are increasingly used by large companies that run into trouble, such as hospital operator NMC Health Plc or construction company Arabtec Holding PJSC.

Covid has given companies in the region another reason for hiring restructuring specialists at an earlier stage for help with strategy or cost cutting before they enter a distressed debt situation.

Investment bank Houlihan Lokey Inc. just moved into larger offices in Dubai and is in advanced stages of opening a branch in Saudi Arabia, where it is working on the $15 billion restructuring of construction giant Saudi Binladin. PwC -- which recently added a partner to its 30-strong restructuring team in the region -- and Deloitte are among the Big Four accounting companies that have similarly been staffing up.

“The economy has matured a lot compared to 10, 20 years ago,” said A&M’s Jaffar. “One of the lessons learned from 2009, is that limited regulation didn’t provide international investors with sufficient comfort, therefore limiting capital flows. Not anymore.”