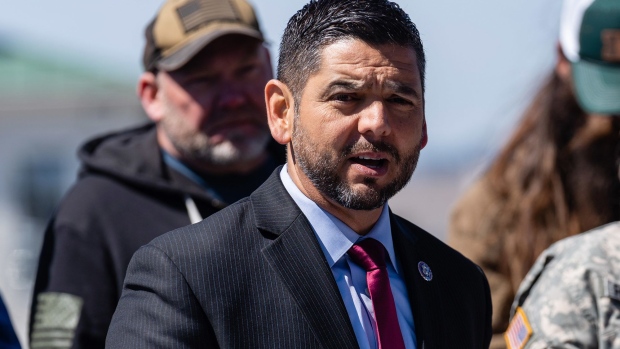 (Bloomberg) -- A group of Hispanic lawmakers urged the Federal Reserve to appoint its first-ever Latino as a regional president after recent searches for the top roles at three other district banks resulted in the hiring of non-Latino candidates.

US Senator Bob Menendez of New Jersey and more than a dozen other members of Congress, in a letter released Thursday, said the directors of the Kansas City Fed — who are handling the search — have “an historic opportunity to appoint a Latino candidate” to fill the vacancy coming in January with President Esther George’s retirement.

Latinos have been shut out of the leadership of the US central bank during its 108-year history, with no presidents of any of the 12 reserve banks identifying as Latino, according to the letter from Menendez, Representative Raul Ruiz of California, chairman of the Congressional Hispanic Caucus, and other Democratic members including senators Alex Padilla, Ben Ray Lujan and Catherine Cortez Masto.

“If the decisions made by the Federal Reserve are to reflect our nation and the experience of working families in the U.S. economy, then the Federal Reserve must prioritize diversity in its leadership,” according to the letter addressed to María Griego-Raby, a New Mexico furniture-company executive who leads the search committee.

George, who turns 65 next month, is stepping down as required by mandatory retirement rules for regional Fed presidents. She’s led the bank since October 2011.

Menendez and Ruiz wrote that the Latino community is the fastest-growing demographic in the country and that nearly one in five residents in the Kansas City Fed district identify as Latino. They expressed disappointment that recent searches for presidents of Boston, Dallas and Chicago didn’t result in the hiring of a Latino chief executive.

Following last week’s announcement of Austan Goolsbee as the new Chicago Fed president, Menendez issued a statement saying it’s “unacceptable, and quite honestly a slap in the face to the 65 million Latinos in the country, that the Federal Reserve Board of Governors has ignored calls from Congress for a more inclusive and transparent leadership selection process.”

The Fed has made some progress with diversity in its leadership, with Atlanta Fed President Raphael Bostic becoming the first Black president of a Fed regional bank in history. This year, Susan Collins become the first Black woman to lead a Fed bank and Lisa Cook became the first Black female governor.

While the Fed’s Board of Governors in Washington is not directly involved in the process of selecting regional Fed presidents — that’s done by directors of the banks — it does ultimately confirm or veto the final selection.