Canada’s economy suffered its worst contraction on record in the second quarter, official data is set to show on Friday, but the country appears to have rebounded strongly since the height of the pandemic.

Economists anticipate gross domestic product shrank by nearly 40 per cent on an annualized basis as businesses and companies cut spending sharply amid virus-related shutdowns. That adds to the 8.2 per cent contraction in the first quarter, which was also a record.

It adds up to a bigger first-half hit than in the U.S., though Canada is expected to see a stronger recovery, having avoided a new wave of cases similar to the one that continues to hamper the expansion south of the border. Monthly data, also to be released on Friday, will probably show Canada has already recouped more of its lost output than the U.S. has.

“The economic recovery has been a little quicker to occur than expected,” said Nathan Janzen, senior economist at Royal Bank of Canada.

The unprecedented contraction reflects stricter containment measures imposed on businesses between March and May to curb the pandemic, along with a steep drop in oil prices that represented a double hit for the energy producing nation.

Economists anticipate gross domestic product probably jumped 5.6% in June, after a 4.5% gain in May -- both record monthly expansions after historic declines in March and April. Statistics Canada is also expected to release a preliminary estimate for July that will show an economy that has made up well over half of the pandemic losses. 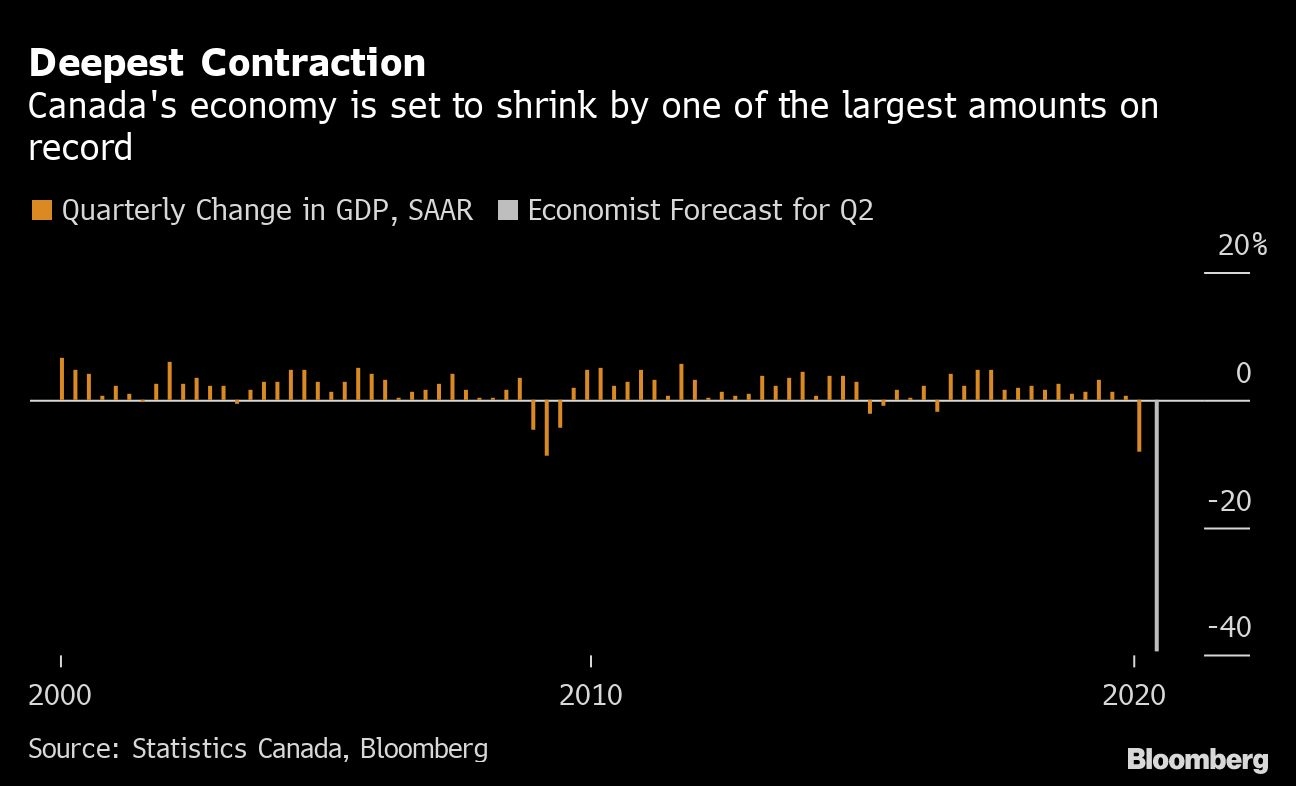 Unlike the U.S., Canada has been able to keep its COVID-19 cases relatively low and hasn’t had to backtrack any reopening plans. Daily new cases have been averaging around 400 in Canada in recent weeks, compared to near 2,000 at the height of the pandemic.

Still, Canada’s economy isn’t expected to fully make up the pandemic losses until 2022 in what’s anticipated to be a long and uneven recovery. The economy is projected to contract by 6.5% for all of this year, before a rebound of 4.8 per cent in 2021, according to the latest survey of economists. That would leave real economic activity next year still about two per cent below 2019 levels.

Canada has also had much larger job losses than other major advanced economies -- a hindrance to a full rebound in consumption, particularly once the initial bounce back in spending peters out. The federal government anticipates that 4.5 million people affected by the pandemic will continue receiving government support in coming months to compensate for lost work. High-frequency data is already showing a slowdown.

The resurgence of cases in the U.S. could also weigh on Canada’s recovery by slowing any rebound in exports -- which probably recorded a historic drop in the second quarter. Economists anticipate an almost 60 per cent annualized decline in the sale of goods and services abroad in the period. The country sends about three-quarters of its exports to the U.S.