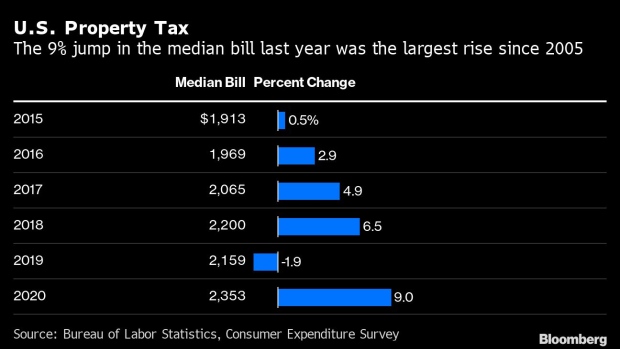 Houses in Westchester County in Rye, New York, U.S., on Monday, July 5, 2021. Contracts to buy suburban New York homes have scaled back from their frenzied pace at the height of the pandemic. Westchester County saw 20% more contracts last month than in June 2020. Photographer: Stephanie Keith/Bloomberg , Bloomberg

(Bloomberg) -- U.S. homeowners enjoying historic gains in the value of their property will likely face a hit next year through a higher tax bill.

Property taxes -- up the most in 15 years in 2020, according to recently released Labor Department data -- will likely see even sharper jumps this year. The median price of previously-owned, single-family homes set new highs last year, and have climbed even more in 2021, which could haunt homeowners when the bills come due and potentially force Americans to dig deeper into their savings.

Also among the top 20 is the San Francisco suburb of Marin County and Fairfield County in Connecticut.

Last year, the country’s median property tax bill rose $194 to $2,353. While the increase reflects a boost in property value, and therefore enhances the homeowner’s wealth, the individual typically doesn’t realize such gains until the property is sold or refinanced. But tax collection doesn’t wait for either occurrence, and the bills have to be paid regardless.

While no one really likes taxes, property taxes are generally the most-dreaded because of the high amount owed and the fact that they’re presented in a tangible bill from state and local governments. That’s unlike income tax, which is usually paid through payroll deductions and can often result in an annual refund due to overpayment.

Related story: Americans Haven’t Been This Down on Housing Market Since 1982

Property taxes are based upon an opaque home valuation estimate as prices for similar homes can vary widely, and they don’t settle until market forces decide on a price. Additionally, property taxes tend to be lagging, as they are based on a home’s value the previous year.

This was problematic a dozen years ago when many homeowners were left paying property taxes on home values that were considerably higher than those in the current market due to the 2008 recession.

This year and next, many homeowners will face a different issue. While many jurisdictions limit how much of an increase in property taxes a local assessor can impose, the rapid run-up in real estate prices will likely mean a higher tax bill is still coming.