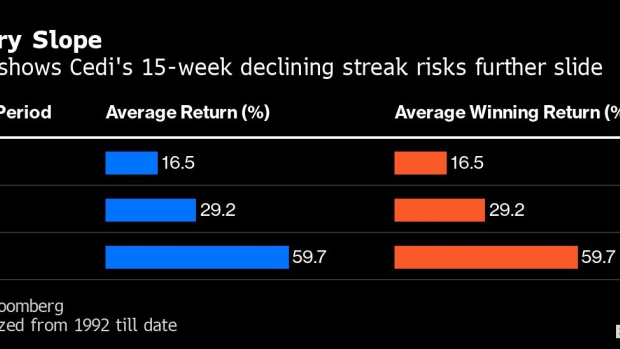 A bus conductor counts Ghana cedi banknotes as the bus waits in traffic in Accra, Ghana, on Thursday, March 15, 2018. Ghana wants to shake up the way it collects tax with the International Monetary Fund telling the government that it’s not raising sufficient income. Photographer: Nicholas Seun Adatsi/Bloomberg , Bloomberg

(Bloomberg) -- Ghana’s currency has dropped for 15 straight weeks and the depreciation may extend, if history is any guide.

The cedi has weakened 36.3% this year making it the world’s worst-performing currency after Sri Lanka’s rupee. A 30-year analysis shows that every time the measure has dropped for 15 straight weeks -- there have been 28 such instances in the period -- the fall has extended each time.

The West African nation’s central bank on Wednesday increased its benchmark interest rate by the biggest margin on record to slow the decline. A depreciating currency will add to the import bill of the country that purchases most of its fuel from overseas, and has been struggling with inflation accelerating at the fastest pace since 2003.