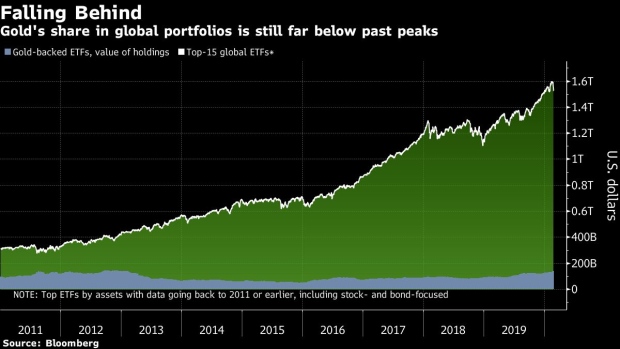 An employee holds one of thirty two, one kilogram bars of gold, worth a total of approximately one million British pounds sit on a table at the Sharps Pixley Ltd. showroom in this arranged photograph in London, U.K., on Thursday, Jan. 18, 2018. Amid the wild Bitcoin ride that’s wiped more than 40 percent off the cryptocurrency's price in a month, a pattern may be emerging: sellers are switching out of digital gold and into the real thing. Photographer: Luke MacGregor/Bloomberg , Bloomberg

(Bloomberg) -- Even with gold at seven-year highs, there’s still room for more gains if history is anything to go by.

Prices have surged this year as haven-seeking investors pour in. Markets have been shaken by worries that the coronavirus outbreak will cripple global growth, coupled with expectations for looser monetary policy around the world. Assets in bullion-backed exchange-traded funds are at the highest ever and money managers are holding a near-record bullish bet.

Yet gold remains a relatively small percentage of portfolios by historic standards. And as investors assess the virus threat to the world’s biggest economies, it’s worth remembering that the metal’s haven qualities are especially evident during recessionary periods.

Here are four charts that show why gold’s still got room to run.

After an unprecedented 25 straight days of inflows, the total value of gold held by exchange-traded funds tracked by Bloomberg is closing in on the record of over $144 billion reached in 2012. But while bullion holdings have jumped this year, they’re still relatively low as a proportion of total ETF assets.

“There is room for further demand -- particularly on the ETF side,” said Benjamin Jones, senior multi-asset strategist at State Street Corp.

Fewer than 10% of investors own gold and the metal probably makes up less than 2% of portfolios on average, according to Peter Grosskopf, chief executive officer of Sprott Inc., a money manager that specializes in precious metals.

“Investor participation in gold is still anemic,” Grosskopf said. He argues that investors should have at least 5% of their assets in gold as a form of insurance. “Even a small move in this direction would have the effect of squeezing a relatively smaller market much, much higher.”

Gold will get a real chance to show off its haven credentials if the virus outbreak transforms into a pandemic. In that scenario, Oxford Economics estimates a cost of $1.1 trillion to global GDP, with both the U.S. and euro-zone economies suffering recessions in the first half of 2020.

“With coronavirus outbreaks reigniting fears of recession, it is worth noting gold has proved to be a resilient ballast in the last three recessions,” said Chris Dhanraj, head of U.S. iShares Investment Strategy at BlackRock Inc.

A comparison of gold prices versus a range of other assets suggests that the metal may still be some way from becoming overpriced, said Michael Hsueh, a strategist at Deutsche Bank AG.

While gold is now quite expensive compared with copper or oil, the ratios remain below their historic peaks.

Gold’s nominal peak would be about $2,700 in today’s U.S. dollars, Hsueh said. There’s likely “quite a fair share of investors who are looking for a pullback just so that they could buy.”

Gold’s 14-day relative strength index briefly moved above 70 this week, which typically suggests securities are overbought and poised for a decline.

But a closer look at the past few years suggests that the RSI isn’t such a reliable indicator for gold. On several occasions, the metal continued rising or held at elevated levels even after the index breached the 85 mark.

There’s always a risk during periods of turmoil that investors sell gold as a last resort, which happened for a period during the 2008 financial crisis.

Still, even if gold’s gains stall, that doesn’t mean the trend has to turn bearish, said Gary Christie, head of North American Research at Trading Central. At times, when the RSI dipped back to levels near 50, it was followed by a renewed price rally, he said.

“The long-term picture is good because momentum and trend indicators are still bullish,” he said.

To contact the editors responsible for this story: Lynn Thomasson at lthomasson@bloomberg.net, ;Phoebe Sedgman at psedgman2@bloomberg.net, Liezel Hill, Jake Lloyd-Smith