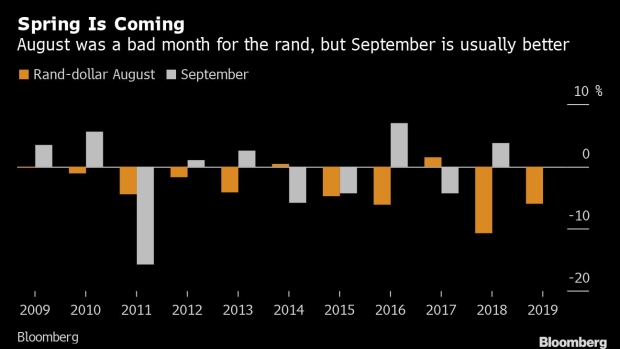 South African rand coins sit alongside a South African 100 rand banknote in this arranged photograph in Pretoria, South Africa, on Wednesday, Aug. 14, 2019. The rand ended a tumultuous week on a positive note, gaining against the dollar for a second day and heading for its first weekly advance in four as technical indicators suggested recent declines are overdone. Photographer: Waldo Swiegers/Bloomberg , Bloomberg

(Bloomberg) -- It’s been a bad August for the rand -- but South Africa’s currency is due for a respite in September, if history is anything to go by.

The rand slumped about 6% against the dollar in the past month, the most in a year, as the escalating U.S.-China trade war weighed on emerging-market assets, while Eskom Holdings SOC Ltd.’s troubles made investors wary about South Africa’s fiscal outlook.

An August slump is not unusual for the rand. It has declined against the dollar in eight out of the past 10 years, according to data compiled by Bloomberg. But in six of those eight years, the currency rebounded in September -- including last year, when it posted a 3.7% gain.

With much bad news already priced in and emerging markets appearing to be stabilizing after a tumultuous August, that pattern may well repeat itself this year.

To contact the reporter on this story: Robert Brand in Cape Town at rbrand9@bloomberg.net