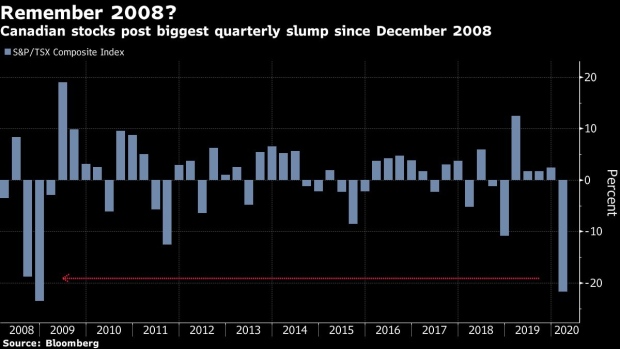 (Bloomberg) -- In a span of about six weeks, Canadian stocks posted their swiftest ever descent from bull to bear market, the loonie tumbled, corporate credit spreads sprang to the widest since 2009 and liquidity all but vanished at times.

The head-spinning quarter has left Canadian markets lagging their U.S. neighbors as the collapse in oil prices compounds the damage from the Covid-19 pandemic. The 22% plunge in equities has laid bare the thinness of the country’s corporate base.

With about a quarter of the S&P/TSX Composite Index weighted to energy and materials, and little in the way of consumer or tech stocks, the latest rout means index has returned just 112% since the lows of the financial crisis in 2009. That compares with about 307% for the S&P 500.

“Canadian stocks and the loonie were hit with the perfect storm of virus concern and its impact to the global economy, along with an oil collapse,” said Mark Stacey, co-chief investment officer of AGFiQ Quantitative Investing and head of portfolio management at AGF Investments Inc. The recovery will be driven by the path of the virus, the extent of the damage to the economy and whether enough stimulus can be provided to “bridge the gap,” he said.

The pandemic has led to more than 7,700 cases in Canada and 89 deaths. With businesses shutting down and 1.5 million workers already filing for unemployment support, economists forecast output could contract by as much as 25% in the second quarter, the biggest retreat in decades. An already weakened energy industry, which generates about 9% of the country’s output, has been left reeling by the price war between Saudi Arabia and Russia. At one point this quarter, a benchmark of Canadian heavy crude tumbled as low as $3.82 a barrel.

The numbers paint a clear picture of investor sentiment:

Investment strategists have become armchair epidemiologists as they grope their way forward.

“First and foremost the virus will drive markets into the second quarter,” said Sue McNamara, fixed income vice president at Beutel Goodman & Co.. “We will start to get a handle on how successful Canada has been at flattening the curve,” she said.

Lesley Marks, a chief investment strategist at BMO Private Wealth, agrees. “The best way to get out of the COVID-19 recession as we all know is to beat the virus,” she said. Marks will be watching the infection curves in Asia as some countries battle a second virus wave and particularly China as its economy attempts to restart. Once the U.S. gets through a backlog of testing, she expects the number of cases to start to flatten.

After four years of broad stability, the Canadian dollar has been hit from all corners: a massive contraction in oil demand due to the coronavirus, a supply glut as Saudi and Russia turn on the taps, and three interest rate cuts from the Bank of Canada in less than a month.

Bipan Rai, head of foreign-exchange strategy at Canadian Imperial Bank of Commerce, forecasts the loonie will remain above C$1.40 per U.S. dollar as oil continues to come under pressure. Crude’s collapse overshadows other factors that drive the currency, including the Bank of Canada’s large-scale asset purchase program announced last week.

Oil’s impact can be seen across Canadian markets -- oil and gas stocks are the biggest losers so far this year and energy bonds have plummeted, with some companies trading in distressed territory.

Interest rate cuts, which provide liquidity, and fiscal spending diminishes the likelihood of an L-shaped recovery, AGF’s Stacey said. “There is still a long way to go before we know it is a U or a W.”

With companies pulling quarterly and full-year forecasts, the upcoming earnings season will provide few clues as to what’s to come. “Stocks will start to respond six to 12 months ahead of an economic recovery, so improvements in economic curves will help us define the magnitude of the impact on the economy and in turn corporate earnings,” BMO’s Marks said.

In the meantime, investors can at least say they’ve lived through historic times. The S&P/TSX Index registered record single-day losses and gains in the quarter: a 12% drop on March 12 and a 12% gain on March 24, both the largest percentage moves since at least 1977 when the index’s predecessor was launched.