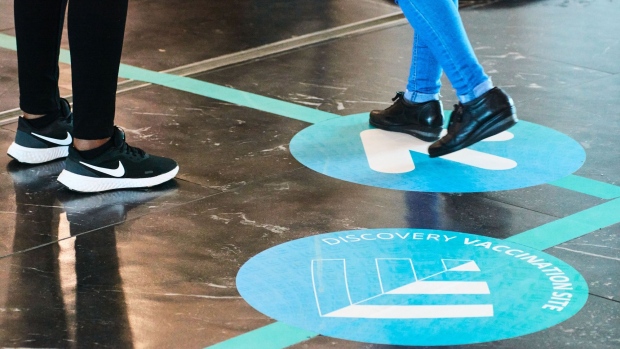 Floor signs mark the way to the vaccination zone at the Discovery head office vaccination site in the Sandton business district of Johannesburg, South Africa, on Tuesday, July 27, 2021. The country has issued more than 6.3 million vaccines so far, and will have enough shots to last until the end of the year, with 31 million doses from Johnson & Johnson and Pfizer Inc. expected to arrive within in the next three months. Photographer: Waldo Swiegers/Bloomberg , Bloomberg

South Africa should consider vaccinating adolescents against the coronavirus after data showed that the most common underlying cause of death among infected youngsters during the ongoing third wave was HIV infection.

“Given the high prevalence of HIV among adolescents in South Africa, efforts should be considered to vaccinate,” those with underlying conditions that put them at increased risk of severe Covid-19, South Africa’s National Institute for Communicable Diseases said in a report this week. Giving shots to those between 15 and 18-years-old “may need to be prioritized to close the immunity gap,” the NICD said.

People younger than 19-years-old accounted for about 12% of South Africa’s confirmed Covid-19 cases at the end of August, according to data from the institute.

With the world’s biggest number of HIV cases, the country has an estimated 8.2 million people or 13.7% of the population infected with the virus that causes the immune disease AIDS, according to the national statistics agency.

So far South Africa has fully vaccinated 7.7 million of its almost 40 million adults but is yet to roll out the shots to those younger than 18. Pfizer Inc. and BioNTech SE’s inoculation has, however, been approved for use by those aged 12 to 18 by the national health regulator.

Sinovac Biotech Ltd. has started a Covid-19 vaccine trial in South Africa in people between the ages of six months and 17 years as part of a global study.

“The HIV epidemic in South Africa is worsening the Covid pandemic,” U.S. biotech billionaire Patrick Soon-Shiong said on Twitter. “We need to address this in South Africa for the safety of all.”

Findings from the NICD data shows cases in children rose 73% during South Africa’s delta variant-driven third wave, with hospital admissions jumping 43%. Still, no increase in deaths in this age group was shown. That compares with reports from the U.S. that indicate a 10-fold increase in pediatric cases, admissions and deaths since the emergence of the delta variant, the NICD said.