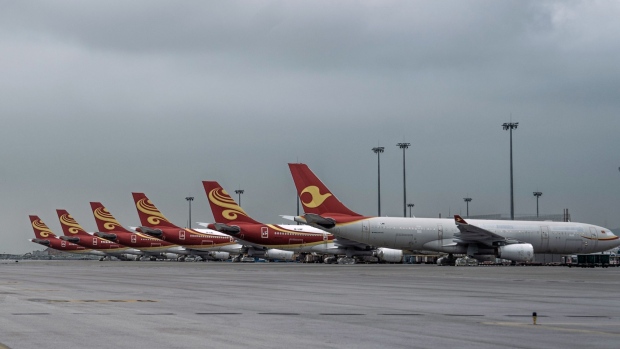 Aircraft operated by Hong Kong Airlines Ltd. at Hong Kong International Airport in Hong Kong, China, on Friday, Nov. 25, 2022. Hong Kong's new, third runway, which opened in July, is part of a HK$141.5 billion ($18 billion) project that will increase its footprint by 50%, adding 650 hectares (1,606 acres), equivalent to the size of Gibraltar. , Bloomberg

(Bloomberg) -- Most creditors of Hong Kong Airlines Ltd. voted to support the carrier’s proposed HK$49 billion ($6.3 billion) debt restructuring, a step to stave off insolvency after travel to and from the city dried up the past three years.

Of those voting among three classes of creditors, holders of at least 80% of the debt in each class backed the plan, according to documents sent to creditors Monday that were seen by Bloomberg News. Court hearings to sign off on the results are set for Dec. 9 in England and Dec. 14 in Hong Kong, the carrier said in a statement.

Hong Kong Airlines was struggling to repay debt even before the pandemic, after months of anti-China protests in 2019 kept visitors away. The cash-strapped firm had seven of its planes seized by the city’s airport authority after it failed to make some payments.

Air traffic in and out of Hong Kong effectively stopped in 2020 as the city enacted one of the world’s longest quarantines to prevent the spread of Covid-19, resulting in the carrier deferring a dollar-bond interest payment. The city in recent months has eased a litany of restrictions, including doing away with hotel quarantine for inbound travelers.

Hong Kong Airlines is among dozens of carriers and aviation-related businesses that have collapsed or have been forced to restructure and downsize. In Asia, these include PT Garuda Indonesia Ltd., Philippine Airlines Inc. and Thai Airways International Pcl.

--With assistance from Alice Huang.