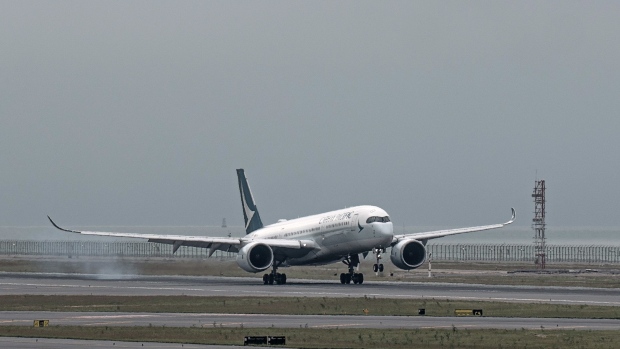 An aircraft operated by Cathay Pacific Airways Ltd. lands on the third runway at Hong Kong International Airport in Hong Kong, China, on Friday, Nov. 25, 2022. Hong Kong's new, third runway, which opened in July, is part of a HK$141.5 billion ($18 billion) project that will increase its footprint by 50%, adding 650 hectares (1,606 acres), equivalent to the size of Gibraltar. , Bloomberg

(Bloomberg) -- Hong Kong expects air passenger traffic to recover to as much as 70% of pre-pandemic levels by the end of next year and return to normality by 2024, South China Morning Post reported, citing an official.

Deputy Director of Airport Operations Steven Yiu Siu-chung brushed aside concern about the airport’s status as an aviation hub, the newspaper reported. The end-2023 forecast of between 60% to 70% of the traffic levels before Covid is in line with a prediction by Hong Kong’s main carrier, Cathay Pacific Airways Ltd.

A total of 755,000 passengers passed through the airport in October, 13% of pre-pandemic levels.