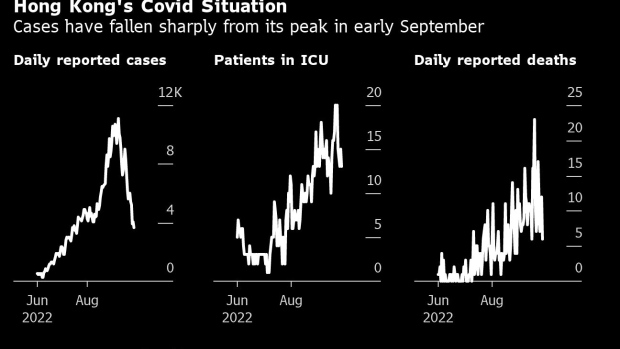 Designated taxis for Covid-19 patients and travelers heading into quarantine queue at Hong Kong International Airport in Hong Kong, China, on Monday, Aug. 8, 2022. Hong Kong will reduce the period of time people entering the city must spend in hotel quarantine to three days from seven, a bolder-than-expected easing of its strict Covid-19 travel curbs, yet still leaving the Asian financial hub isolated in a world thats mostly moved on from the pandemic. Photographer: Bertha Wang/Bloomberg , Bloomberg

(Bloomberg) -- Hong Kong will stick with its push to reopen to the world unless a dangerous new virus variant emerges, said the city’s top health official, while stressing the financial hub has an obligation to protect mainland China from major Covid-19 outbreaks.

“We have to be prepared. Emerging diseases may come anytime,” Secretary for Health Lo Chung-mau said in a Bloomberg TV interview on Thursday, highlighting that decisions around an easing of rules will be made after reviewing data. “This is our obligation: to make sure that we won’t cause a major outbreak in the rest of China.”

Lo has been a high-profile voice in the government defending ongoing Covid measures, and has often used statistics ranging from case figures to sewage sampling data to underpin his cautious approach to assessing further easing. While Chief Executive John Lee has also flagged the threat of new variants emerging, he has stressed that the city does not want to re-impose Covid restrictions at a time when most of the world is living with the virus.

Lo has at times been publicly at odds with other key health figures, signaling divisions among the city’s elite over how to handle the pandemic. A spat between Lo and the former head of Hong Kong’s public hospital network over the severity of Covid escalated earlier this month, when the two disagreed on how to calculate its mortality risk.

Lo said officials will look at statistics in deciding when to lift remaining restrictions on inbound travelers, who are barred from going to bars or eating at restaurants for three days and must test daily for seven days. The government will continue to test inbound travelers in order to stay alert to new variants, according to Lo.

Daily infections in the city are hovering around 4,000, down from a peak of more than 10,000 in early September.

When asked about when Hong Kong could move to a so-called 0+0 arrangement for inbound travelers -- meaning no quarantine and no movement restrictions -- he said: “if it’s possible today, I won’t wait till tomorrow.”

Hong Kong is slowly unwinding some of its toughest pandemic rules, which had kept it in line with mainland China’s Covid Zero policies but devastated the city’s economy and sparked an exodus of residents. Its current push to ease rules is an effort to show its return as a global financial center, and comes ahead of several high-profile events including an international banking summit and the iconic Rugby Sevens tournament planned for November.

But its reopening trails all of its major rivals, particularly Singapore, and has been met with calls from businesses for the government to remove all remaining restrictions and provide a clear road map to reopen fully.

In addition to the international border relaxation, Hong Kong is having “a very good discussion” on expanding travel flow into mainland China, Lo said, referring to a previously announced plan to allow people to quarantine in Hong Kong before crossing the land border into neighboring Shenzhen.

The city must navigate between opening to the rest of the world and fulfilling its obligation to safeguard mainland China from any outbreaks that may arise from Hong Kong’s easing, according to Lo. Asked if China’s zero-tolerance policy and its upcoming party congress were factors in whether and when Hong Kong can fully lift all Covid restrictions, he said it was.

“I don’t think Hong Kong can just look at the international thing and follow the rest of the world,” he said. “I have to consider the other thing. Our motherland is like our family.”