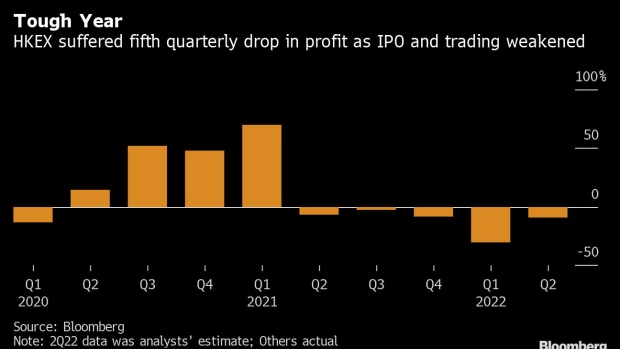 The stock code for Hong Kong Exchanges & Clearing Ltd. on an employee's vest at Hong Kong Stock Exchange in Hong Kong, China, on Wednesday, July 13, 2022. Hong Kong is likely to see more dual-traded companies shift toward primary listings in the financial hub as they seek inclusion in trading links with mainland China, according to the exchange's Chief Executive Officer Nicolas Aguzin. , Bloomberg

(Bloomberg) -- Hong Kong’s stock exchange is redeeming some of its external investment portfolio after profit slid more than estimated, weighed down by falling markets, trading and initial public offerings.

Hong Kong Exchanges & Clearing Ltd. has been hurt by sliding markets and the still tight Covid restrictions that have prevented bankers from traveling, while more mainland Chinese firms are seeking to list on rival bourses in Shanghai and Shenzhen. In the first half, IPOs were down more than 90%, while overall trading volumes slid 27%.

The bourse lost HK$274 million ($35 million) in the second quarter and said it will redeem HK$2 billion from the external portfolio in the second half. The redemption will be invested internally in the corporate fund, which is placed in cash and bank deposits, equities and debt.

“We want to avoid significant movement in our profitability numbers,” Chief Executive Officer Nicolas Aguzin said in an interview with Bloomberg TV.

Net income fell 22% to HK$2.17 billion in the second quarter, missing the HK$2.52 billion consensus estimate in a Bloomberg survey. It was the fifth consecutive profit decline as core revenue in the period slid 4%.

However, the exchange maintained that the IPO pipeline is strong and it may now see a reboot as tension over auditing rules could bring a bevy of mainland Chinese firms to list or become more anchored in the city. Alibaba Group Holdings Ltd. announced in July it would seek to add another primary listing in Hong Kong while Chinese state-owned giants such as China Life Insurance Co., and PetroChina Co. said this month they would delist in New York.

In a report this month, Goldman Sachs Group Inc. predicted that the bourse’s average daily turnover will bottom out at HK$111 billion in the third quarter, then jump about 20% in the next year. Future momentum is hinged on the bourse’s further IPO reforms, targeting companies in the deep-tech space and a review of its small-cap platform, GEM.

“If implemented such reforms could further enlarge the pipeline and setup for better 2023 in regard to new listings and incremental volume growth,” Goldman Sach’s analysts led by Gurpreet Singh Sahi wrote in a note dated Aug. 5.

Even so, Aguzin warned of caution. “We know there will continue to be headwinds, especially in the short term,” Aguzin told reporters Wednesday, citing geopolitics, market volatility and rising interest rate. “We expect cash market trading volume to continue to be affected by broader market sentiment.”

(Updates with CEO comments in fourth and last paragraphs.)