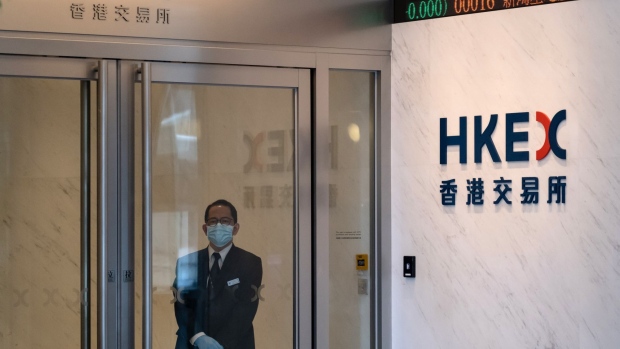 A security officer wearing a protective mask stands behind a door next to signage for Hong Kong Exchanges & Clearing Ltd. (HKEX) at the Exchange Square complex in Hong Kong, China, on Wednesday, Aug. 19, 2020. HKEX posted a 1% gain in profit, benefiting from a spate of high-profile Chinese stock listings and a pick up in trading as the pandemic and political tensions stoked volatility. Photographer: Roy Liu/Bloomberg , Bloomberg

(Bloomberg) -- Hong Kong Exchanges & Clearing Ltd. plans to establish a representative office in New York to market its offerings in the U.S. amid increasing doubts over the former British colony’s status as a financial hub.

The new office will comprise of only about five staff, people familiar with the plans said, asking not to be identified discussing private information. The exchange will need regulatory licenses and plans to open the office as early as next year, the people said.

Hong Kong’s status as an international financial center has come under increasing doubts after China tightened its political grip on the city and as strict quarantine measures restrict travel. At the same time, the bourse has benefited from U.S. regulators pushing to delist Chinese firms due to a lack of access to company accounts and growing geopolitical tension. Officials in Beijing are also cracking down on overseas listings.

The opening comes after Nicholas Aguzin, a former JPMorgan Chase & Co. banker, took over as chief executive officer this year. He was given the remit of both tightening controls at home and reviving the bourse’s bid to expand internationally two years after the failed acquisition of the London Stock Exchange. The exchange is also expanding its ties to the Chinese mainland, most recently launching futures on Chinese shares traded in Shanghai.

The New York office would mark its first presence in the U.S. The exchange also has offices in Shanghai, Beijing, Singapore and London, and owns the London Metal Exchange.

The Beijing-controlled Hong Kong government owns about 6% of HKEX, appoints the chairman and half of the board. The “unusual” structure was cited in a letter from the LSE in rejecting HKEX’s surprise $36.6 billion bid in 2019.

HKEX officials are confident that the modest office opening won’t be met with any political opposition, the people said.

The exchange has had plans to open new marketing and client coverage hubs in North America and Europe to expand its international footprint and customer engagement, improve client coverage and promote the Hong Kong markets.