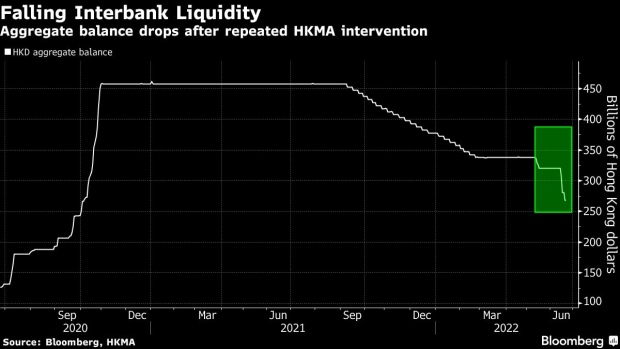 Boats sail across Victoria Harbour in front of the Hong Kong island skyline in Hong Kong, China, on Monday, Aug. 5, 2019. Hong Kong leader Carrie Lam warned of a "very dangerous situation" as protesters moved to shut down the Asian financial hub with a general strike and commute disruptions on Monday, after a ninth straight weekend of unrest in opposition to China’s tightening grip. Photographer: Paul Yeung/Bloomberg , Bloomberg

(Bloomberg) -- Hong Kong’s de facto central bank bought the local dollar at the fastest pace on record to defend its currency from crossing the weak end of its trading band.

The Hong Kong Monetary Authority bought HK$78.1 billion ($10 billion) so far this month, including its HK$25.6 billion purchase last week, which was the largest for a single day as per Bloomberg data going back to 2003. The currency still continues to linger near the weak end of its 7.75-to-7.85 per greenback trading band.

Despite the heavy intervention, the Hong Kong dollar continues to remain weak as the city’s aggregate balance -- a gauge of interbank liquidity -- remains high. This means its still relatively cheap for traders to short the currency against the higher yielding greenback.

This is likely to keep the downward pressure on the Hong Kong dollar and interventions are likely to continue, said Frances Cheung, rates strategist at Oversea-Chinese Banking Corp. in Hong Kong.

HKMA Chief Executive Eddie Yue had said earlier this week that the HKMA may accelerate purchases of the local currency until the city’s interest rates approach the US level, Sing Tao Daily reported. The Hong Kong dollar was little changed at 7.85 per greenback as of 9:39 a.m. local time.