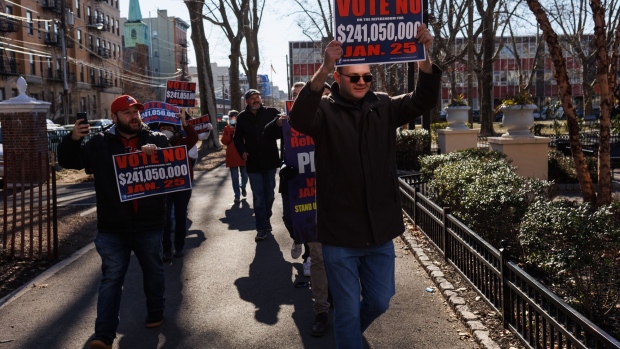 (Bloomberg) -- Hoboken voters sent a clear message that a $241 million school-construction proposal was excessive, rejecting a tax hike as the Board of Education’s solution for the New Jersey city’s swelling population.

Opponents said the proposal for a new high school with an indoor ice rink and rooftop football field  lacked transparency and was rushed.

With 100% of districts reporting unofficial results, voters in the square-mile city across the Hudson River from Manhattan were rejecting the proposal about 2-to-1. Though school officials didn’t publicly comment and didn’t return telephone calls, the mayor and local newspapers declared the proposal defeated.

Jerome Abernathy, a resident and father of two, said the funds should have been targeted more at academic improvements and less on amenities. He said he would have been happy to pay higher taxes for that.

“My kids went to the Dalton School, it costs a lot of money, it’s one of the best high schools in the country, and they didn’t have amenities like that,” said Abernathy, who has lived in Hoboken since 1991.

Abernathy handled advertising strategy for Hoboken for Public Schools, organized to get no-voters to the polls. Its targets included empty-nesters, alternative-school advocates and single-family homeowners. The strongest dissent came from residents surprised by how quickly the proposal materialized and was placed on the ballot, Abernathy said. He said he spent about $5,000 of his own on the group’s effort.

Of 10 school-bond referendums on Tuesday’s ballot in New Jersey, Hoboken’s was the only one to fail, according to the New Jersey School Boards Association. Hoboken’s $241 million price tag was over 60% of the total amount put to voters across the state.

The nine approved referendums ranged from $985,000 to $33 million, and all were to receive some state aid for debt service, unlike Hoboken.

Prior to the vote, Hoboken School Board President Sharyn Angley said there was “no contingency plan” should the referendum fail. The board has to wait a year before a new plan can be placed on the ballot.

“We certainly intend to engage the community with more input,” said Jane Mylan, 44, who supported the bond through Friends of the New Hoboken High School. She attributed the vote’s failure to “misconceptions” that enrollment in the district isn’t growing, and the city’s lack of access to state aid.

Hoboken is one of the most densely populated cities in the country, with more than 60,000 people counted in the 2020 Census  -- a 21% increase from 2010. The city that is a short train ride from the World Trade Center is a hub of young professionals, many of whom have begun families there.

New Jerseyans pay the highest property taxes in the nation -- an average $9,284 in 2021. Hoboken’s average bill -- a combination of county, school and municipal levies -- was $8,402. School officials had wanted to increase residents’ property taxes by about 6%.

Daniel Solender, head of municipals at Lord Abbett & Co. in neighboring Jersey City, pointed to the portion of Hoboken’s young, childless population that was reluctant to shoulder the cost of the new school.

“The rejection was mainly due to how ambitious the plan was and how costly it was,” he said. “It might have had a better chance if it was a less fancy plan.”