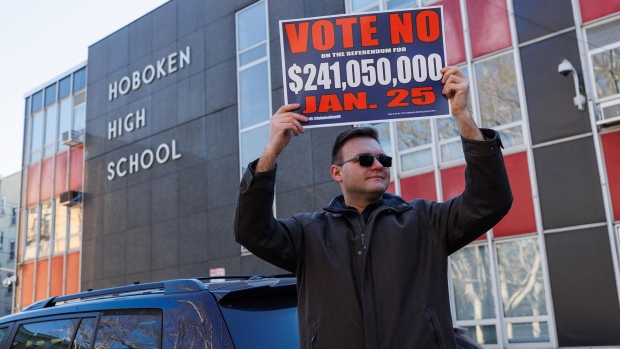 (Bloomberg) -- Voters in Hoboken, one of the fastest-growing cities in New Jersey, are being asked Tuesday to approve a bond referendum for a new high school -- complete with a rooftop football field and an indoor ice rink -- at a cost of more than $200,000 per student.

The $241 million proposal has whipped up a frenzy of impassioned debate in the square-mile city across the Hudson River from Manhattan, after years of pandemic education have fractured school communities across the U.S.

Advocates of the new high school cite the need for more classroom space as enrollment numbers swell, and the risk of an even more expensive project if construction is deferred. Critics say the money would be better spent on improving education to help students who lost ground with remote schooling.

“It’s exorbitantly expensive,” said Pavel Sokolov, 29, a member of the local Republican party and founder of Hoboken for Public Schools, a group of residents that has helped organize opposition to the referendum. “This proposal does not address academics, but only focuses on luxury amenities.”

The Hoboken Board of Education’s proposal calls for a four-story, 375,000-square-foot building with an indoor pool, aquaponics lab, 800-seat auditorium, 295-seat theater, dozens of classrooms and a range of athletic amenities.

The project’s architect, Frank Tedesco, principal at Mount Vernon Group Architects, said the costs come out to about $500 per square foot. That’s “right in line” with high schools across the Northeast, he said at a Jan. 13 virtual information session.

Hoboken, once a destination largely for young single professionals, has seen its population surge as residents settled down, got married and had children. Enrollment in its public schools grew 27% over the last decade. Freshman enrollment this year at Hoboken High School was 166 students, the highest in 10 years. For kindergarten to fifth grade students, where capacity pressure is the tightest, enrollment grew 57%.

A demographic study commissioned by the Hoboken Board of Education shows high school enrollment rising from 461 to 814 students over the next decade. The existing building has a capacity of 1,100; the new one would have maximum room for about 100 more students and free up space in lower schools.

“This proposal is for a new high school, but it also includes a complete transformation of the district in its entirety,” said Sharyn Angley, president of the board.

In recent years, some of the more affluent families who moved to Hoboken have sought alternatives to the public school system, creating a disconnect between the makeup of the residents, 81% white, and the student body, which was 51% white in 2019-2020.

“For years, we have not necessarily been serving a school population that mirrors that of the community,” Hoboken Superintendent Christine Johnson said, adding that 70% of the high school population is low income. “We are a one-square-mile city with three charter schools, which is almost unheard of.”

The project has the support of Hoboken Mayor Ravi Bhalla, a Democrat, who pointed to community benefits and the roughly 60 years since the city last upgraded its high school.

“This is a world-class city, the time is now for it to have world-class high school facilities,” Bhalla said in a statement. “With a top-notch high school, families will think twice before leaving Hoboken because of the schools, or send their children to private schools. This will in turn substantially increase the property values of all residents.”

The Hoboken school board plans to fund construction with a 30-year bond that carries an interest rate of 2.2% and, including debt service, would total about $331 million. The district estimates residents would see a roughly 6% increase in property taxes. For a two-bedroom apartment with an assessed value of $778,000, that’s about $726 yearly.

The outlook for the referendum is unclear. Overall yearly spending-approval rates for school construction over the last 20 years have ranged from 26% in 2010 to 84% in 2003.

“If it passes legally and gets through, I am sure there would be a lot of demand,” said Daniel Solender, head of municipals at Lord Abbett & Co., adding demand will hinge on the bond’s structure and rating.

Hoboken is one of 31 urban districts that the state Supreme Court tasked the state with assuring that per-pupil spending was in line with wealthier suburban ones. New Jersey’s Schools Development Authority typically funds construction in those poorer districts, but isn’t funding Hoboken’s high school project.

Hoboken also is not slated to receive any direct funding assistance from the state, as is usual with school bond issues. Of 10 school referendums on the ballot Tuesday in New Jersey, totaling $395 million, Hoboken is the only one not receiving state assistance. Johnson said state rules prohibit districts from getting both state aid and SDA funding, which Hoboken is tapping for a separate elementary school project.

“We obviously will continue to pursue the possibility of receiving some sort of debt-service aid,” Johnson said.

Amy Duskin, a resident and mother of 3, became involved with Friends of the New Hoboken High School to help build support for the bond. With completion planned by the start of the 2025-2026 school year, her second grade son would reap the benefits.

“I understand that it’s going to cost money,” said Duskin, who estimates her tax bill will rise by about $60 per month. “The one thing I would say to people is, our children and the future of Hoboken are well worth the money.”