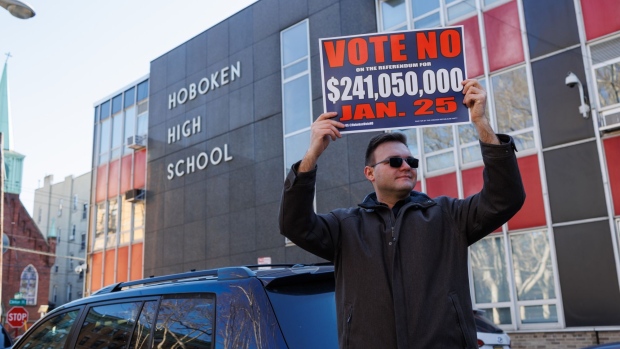 Volunteers of the Hoboken High School Concerned Citizens Information Exchange march during a rally against the Hoboken High School referendum in Hoboken, New Jersey, U.S., on Saturday, Jan. 22, 2022. Voters in Hoboken, one of the fastest-growing cities in New Jersey, are being asked Tuesday to approve a bond referendum for a new high school -complete with a rooftop football field and an indoor ice rink - at a cost of more than $200,000 per student. , Bloomberg

(Bloomberg) -- Hoboken residents were rejecting a $241 million bond measure to build a new high school in a special election Tuesday, one of the costliest school construction referendums in state history.

The bond was failing 66% to 34%, with 35 out of 42 precincts reporting, according to unofficial results posted by Hudson County Tuesday night.

Hoboken officials proposed the new school to address the city’s population growth, among the fastest in the state. Enrollment in the city’s public schools grew 27% over the last decade. For kindergarten to fifth grade students, where capacity pressure is the tightest, enrollment grew 57%.

“The community has sent a resounding rejection for the proposal,” said Pavel Sokolov, who helped organize opposition to the bond. “There are enrollment capacity issues and academic issues in our town that need to be addressed. We fully intend and plan to be involved in the conversation.”

Plans for the school, which would have a capacity of about 1,200, feature amenities including a rooftop football field and an indoor ice rink. At full capacity, the cost would be more than $200,000 per student.

A 30-year bond with an interest rate of 2.2% would have funded construction, according to the Hoboken school board’s plans. The district estimated a roughly 6% increase in property taxes for residents to help cover the cost. For a two-bedroom apartment with an assessed value of $778,000, that translates to about $726 yearly.