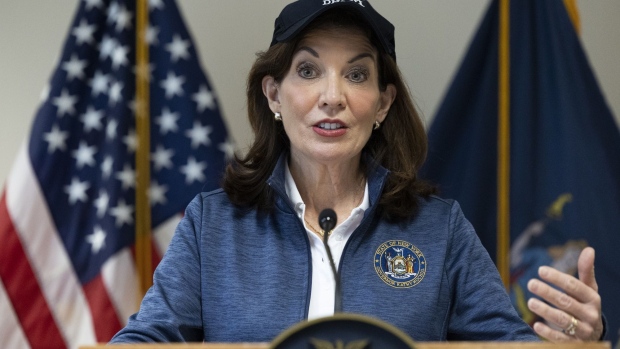 Kathy Hochul, governor of New York, speaks during a news conference following a visit to a temporary warming center in Kingston, New York, U.S., on Monday, Feb. 7, 2022. Hochul surveyed storm damage, visited a local warming center and provided an update to the residents of Ulster County, many of whom were without power throughout the weekend as a result of a winter storm late last week that brought nearly three-quarters of an inch of flat ice to the area. , Bloomberg

(Bloomberg) -- New York Governor Kathy Hochul called on social media companies to do more to crack down on racist, anti-immigrant and antisemitic rhetoric on their platforms, saying the man accused of shooting and killing 10 people in a Buffalo supermarket was radicalized online.

The accused 18-year-old shooter broadcast Saturday’s attack, which took place in a predominantly Black neighborhood, live and had posted a white supremacist manifesto online, Hochul said Sunday on CNN’s “State of the Union.” She said he had developed his hatred by viewing radical content on social media.

“This spreads like a virus and that’s why I’m calling on the CEOs of all the social media platforms to examine their policies and to be able to look me in the eye and tell me that everything is being done that they can do to make sure this information is not spread,” the governor, a Democrat, said.

Hochul’s comments add to the renewed debate over how social media companies should regulate content on their sites. A federal judge has put on hold a new Texas law that would largely block companies like Twitter Inc. and Meta Platforms Inc.’s Facebook from moderating content to root out hate speech and extremism. Elon Musk, who is working to buy Twitter, has described himself as a “free speech absolutist” and plans to take a minimalist approach to restrictions on the platform.

Hochul said on ABC’s “This Week” that social media companies need to identify and take down violent or hateful content “the second it appears.”

Authorities say the accused Buffalo shooter visited sites espousing white supremacist ideologies and he also streamed the assault, carried out with a legally purchased assault rifle, on the Amazon.com Inc.-owned platform Twitch. Twitch told the Associated Press in a statement that it ended the transmission “less than two minutes after the violence started.”

“I think the governor was right about the social media companies having some responsibility,” she said. “There has to be vigilance.”