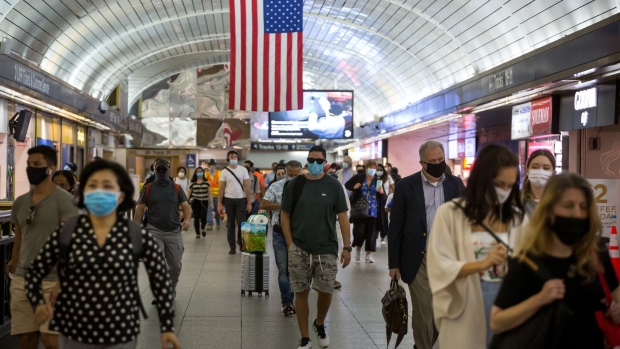 Kathy Hochul, governor of New York, speaks during a news conference in New York, U.S., on Monday, Sept 30, 2021. A Covid-19 vaccine mandate for health workers that went into effect this week is working to boost vaccination rates, providing a road map to other states that are trying to fight the highly transmissible delta variant. Hochul said this week. , Bloomberg

The new proposal focuses on modernizing the existing rail hub instead of building a new terminal, Hochul announced Wednesday. The reimagined Penn Station -- -- serving Long Island Rail Road and NJ Transit commuters -- will be on a single-level, doubling circulation space on the main hall and adding more accessibility and more escalators.

The station will also get a new name: “something to do with how iconic New York State is,” Hochul said.

It would be a long-awaited upgrade for the beleaguered train hub that the governor called “depressing.”

“Improving the quality of life for New Yorkers is my top priority,” she said.

The overhaul is projected to cost $6 billion to $7 billion and be done within four to five years, Hochul said.

Her plan for the surrounding area lowers the building heights of the previous proposal, reducing the density by 1.4 million square feet, and building as many as 1,800 residential units. All buildings will be made greener and more sustainable, she said. Eight acres of public space will be added.

A scaled-down Penn complex plan can generate the revenue needed to fund the transformation of the rail hub, she said.

New towers would bring more workers to an area that’s on the southern fringe of Midtown and east of the massive Hudson Yards development. Vornado Realty Trust, a major New York office landlord, owns much of the land that is being targeted for development.

Cuomo’s ambitious proposal had drawn ire from lawmakers and community members who said it was a land grab by a governor seeking to bypass the authority of city officials.

Hochul had already put the brakes on a rail connection to LaGuardia Airport, a project also shepherded by Cuomo prior to his sexual harassment scandal and resignation earlier this year.