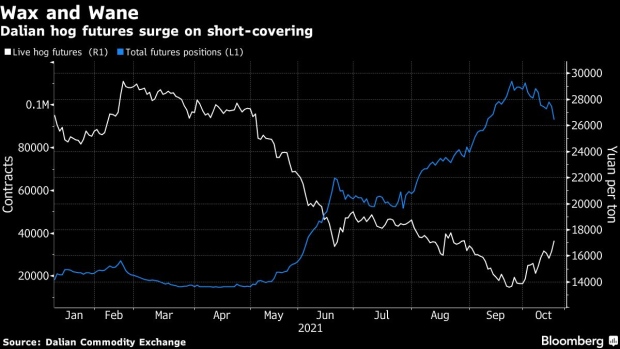 Buyers mark pigs in a holding pen at a wholesale market in Nanning, Guangxi province, China, on Monday, Sept. 16, 2019. A protracted U.S. trade war, protests in Hong Kong, soaring food prices and the slowest economic growth in decades are among the many problems facing Chinese President Xi Jinping as he prepares to celebrate 70 years of Communist Party rule. Photographer: Qilai Shen/Bloomberg , Bloomberg

(Bloomberg) -- Live pig futures in China, the world’s biggest hog producer, surged by their daily limit to the strongest level in two months amid optimism over a seasonal increase in demand. Apple futures jumped to their highest in a year on concerns that cold weather may limit supplies.

Hog futures for delivery in January, a time when demand for pork increases before the Lunar New Year, soared 7% to 17,470 yuan ($2,737) a ton in Dalian, before trimming the gain to just over 5%. Even after a recovery in the past month, the most active contract is still down more than 40% from its February high. A similar trend is observable on the spot market.

Demand for food normally rises around this time of year as stores and restaurants restock and items such as sausages and smoked pork are prepared ahead of the winter, said Jim Huang, head of China-America Commodity Data Analytics, an independent consulting firm focused on agriculture. Meanwhile, supply could have suffered because the average market weight for hogs has tumbled after prices slumped in recent months, Huang said.

The recently rally in live hog futures is also caused by breeders covering their short positions in the belief that this year’s selloff has gone too far, said Lyu Pin, a Dalian-based analyst with Everbright Futures Co. But the potential for further price increases is limited because there is still too much supply in the industry relative to demand, he said.

Pork output in China jumped 38% in the first nine months of the year to 39 million tons, the country’s statistics agency said last week, while hog numbers climbed 18% on year to 437.6 million by the end of September, underscoring the recovery from African swine fever. Hog producers have forecast heavy losses because of sluggish pork prices and rising feed costs.

Fresh apple futures in Zhengzhou also jumped the daily limit Monday, bringing their advance to more than 50% in less than seven weeks. Jujube futures in Zhengzhou have been rising too and are priced at 15,270 yuan a ton, compared with an average of 10,709 yuan over the past year. These two contracts are seen by futures traders as a way to trade fruit and vegetable prices in China.

Any sign that rising food prices are here to stay will add to a myriad of challenges now facing China, from power shortages, to a slowing economy and surging producer prices. The government has also been keen to clamp down on excessive speculation in property and financial markets, which may make investors wary of piling up too many bets on futures.