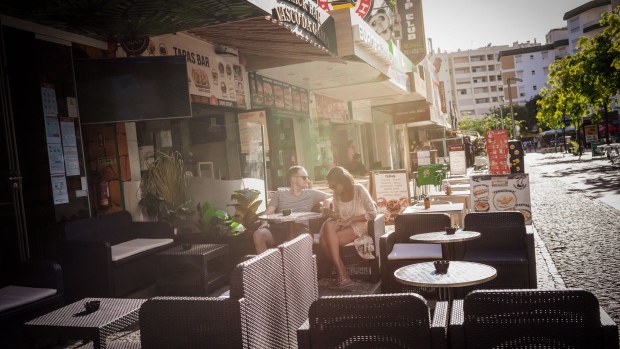 A couple sit in the empty outdoor terrace area of a bar at Praia da Rocha in Portimao, Algarve region, Portugal, on Thursday, July 16, 2020. Portugal’s central bank said the economy will shrink close to 10% as the crucial tourism industry is battered by lockdowns and coronavirus concerns. Photographer: Jose Sarmento Matos/Bloomberg , Bloomberg

(Bloomberg) -- TUI AG said it’s more optimistic about a summer tourism rebound as the U.K.’s resumption of leisure travel spurs bookings and the European Union makes progress toward reopening its own borders.

The world’s biggest tour operator said in a statement Wednesday that a pick up in demand has been “clearly evident in recent weeks,” with bookings doubling since April. The Hanover, Germany-based company reiterated that it will offer 75% of 2019 capacity in the peak summer months.

Confidence in a travel revival has been rekindled by Britain’s move to restore vacations following the success of its coronavirus vaccination program. TUI is banking on a rebound to restore cash flows after reporting an operating loss of 1.3 billion euros ($1.6 billion) in the fiscal first half ended March 31.

“The prospects for early summer 2021 make me optimistic for tourism and for TUI,” Chief Executive Officer Fritz Joussen said in a statement. “England in particular offers potential when new travel corridors to southern Europe open there too in the next few weeks.”

U.K. bookings are up 109% since the end of March, TUI said, buoyed by the announcement last week that leisure travel to 12 destinations including Portugal will be permitted from May 17.

TUI has added flights from London Gatwick, Manchester and Birmingham for 10- and 11-night holidays on the Portuguese island of Madeira in anticipation of the U.K. reopening, which initially applies to English airports, as well as from Bristol to Faro on the Algarve coast.

The company held off from issuing a financial forecast. Liquidity stood at 1.7 billion euros as of May 7.