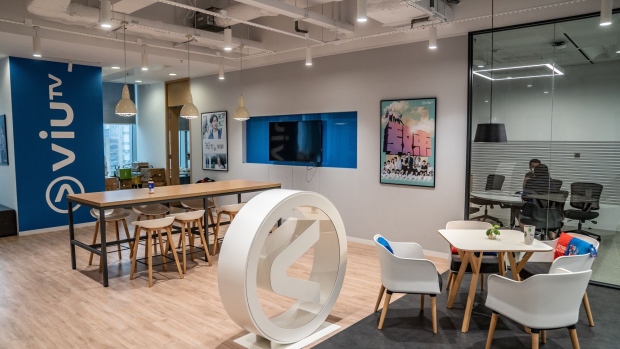 Employees works in a room at a PCCW Media Ltd. office in Hong Kong, China, on Monday, Aug. 9, 2021. PCCW's Hong Kong-based streaming business is on a roll, mulling a potential initial public offering after its platform Viu beat Netflix Inc. in subscribers in one of Asia's most competitive markets. Photographer: Lam Yik/Bloomberg , Bloomberg

(Bloomberg) -- Hollywood studios battling online piracy have enlisted the first Asian members of an industry coalition set up to seek out and shut down illegal streaming sites.

The Hong Kong-based streaming service Viu and True Visions, a leading Thai pay-TV provider, will be the first Asian companies to join the Alliance for Creativity and Entertainment, whose members include Netflix Inc., Walt Disney Co. and other major media companies.

The alliance is part of the US Motion Picture Association and has 39 members, with plans to enlist other players in Latin America and elsewhere. Dues from the media organizations are used to finance legal fights against the theft of content.

Piracy has been on the rise during the pandemic, costing US entertainment companies an estimated $29 billion to $71 billion in lost revenue annually, according to executives at the organization. And media companies typically notice, and act on, copyright and intellectual property theft before police.

“We now have local partners fighting this local fight, who can connect to local law enforcement,” Charles Rivkin, chairman of the alliance and the Motion Picture Association, said in an interview. “It’s a whole lot more effective when you have a local player come in with the MPA than the MPA just parachuting in on our own and trying to make headway.”

While the organization is mostly made of US companies, including all of the major Hollywood studios and streaming services that form the MPA trade group, it also has international partners. BBC Worldwide and Vivendi SE’s Canal+ are two of its biggest European members. Rivkin said he has long sought to expand the group’s footprint in Asia-Pacific, where some of the largest illegal streaming sites are run.

Viu is one of the biggest streaming platforms in Asia, with 58.6 million monthly active users, according to the company. True Visions is a cable and satellite TV operator based in Thailand, and last month helped the alliance and local police arrest an alleged content pirate and shut down his website.

“We recognize the need to address the piracy that is widespread in our markets,” Marianne Lee, chief of content acquisition and development at Viu, said in a statement. “We are committed to ensuring consumers move from illegal piracy sites to legal options.”

While Hollywood has battled film and TV piracy for years, it became particularly problematic after major studios made their content more readily accessible online during pandemic lockdowns. John Fithian, the head of the National Association of Theatre Owners, said in April piracy was so widespread in 2021 that studios scrapped plans to debut their big, new films online rather than in theaters.

The alliance says it’s also looking to partner with major sports leagues across the world, since they are also the target of digital content thieves. In April, ACE added beIN Media Group, one of the biggest international sports broadcasters, to its ranks.