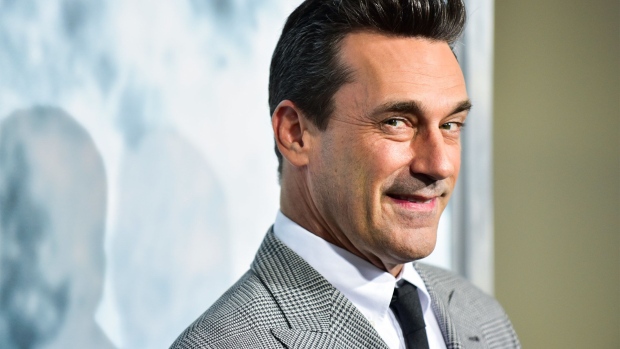 The Emmy-winning actor has appeared in multiple commercials, selling everything from Mercedes-Benz cars to H&R Block tax preparations services. He promoted Apple TV+ during the NFL playoffs and spoofed his own promotional skills on “Saturday Night Live,” in a faux commercial for sliced ham you can eat in the bathroom.

“It’s not lost on me that some of our greatest film directors got their start in the commercial space, like Ridley Scott and David Fincher,” the actor said in an interview. “The old school stigma of doing commercials has rightfully washed away.’’

Hamm is still acting of course. He stars in “Corner Office,” a dark comedy premiering at the Tribeca Film Festival next month, and as Vice Admiral Beau "Cyclone" Simpson in the new ‘Top Gun: Maverick” sequel now in theaters. There, he got to work with Tom Cruise, an actor not known for pitching products or even appearing on TV.

“Tom Cruise, he is just a movie star, that’s what he does, and he does it very well. But he is a movie star 24/7,” Hamm said.Hamm doesn’t consider himself a movie star in the same light. Rather he’s happy to perform on any stage, including commercials, a business that could get busier as streaming services such as Netflix and Disney+ begin to accept advertising.

He is currently featured in a new series of ads for Progressive Insurance that began airing this month. He joins actress Stephanie Courtney, who appeared in the first season of “Mad Men” and has portrayed the character Flo in Progressive ads for more than a decade. In the spots, which play out over a number of episodes, she reconnects with an old beau, played by Hamm. The commercials are designed in part to air when viewers are binge-watching a particular TV series, so their impact can be maximized.

The campaign launched with a movie-style trailer during the TV industry’s annual upfront presentations to advertisers this month. New 30-second spots will begin airing on June 6 and July 25 as part of a nationwide rollout across broadcast, cable and streaming.

“The binge ad format is appealing because we have a story to tell—and it’s a multipart story,” said Progressive Chief Marketing Officer Remi Kent. Streaming ads may evolve one day to include “personalized messaging” to help users find information they need once they’re engaged, she said.

“It’s a challenge to tell a story in a 30-second spot,” Hamm said. “It's a challenge to get a message across in a one-minute spot or a 15-second ad or what have you. And there are so many creative ways to do that nowadays.”

The actor said the old days where celebrities appeared in ads overseas so as not to spoil their image at home are over. “What we obviously are seeing with the rise of the internet and social media is that we are all very much part of a global community,” he said.

Hamm did do a series of ads for a Canadian food delivery app called SkipTheDishes where he played a man pretending to be Canadian. “That's kind of taken off and become its own thing,” Hamm said. “I get recognized in Canada as an honorary Canadian.”