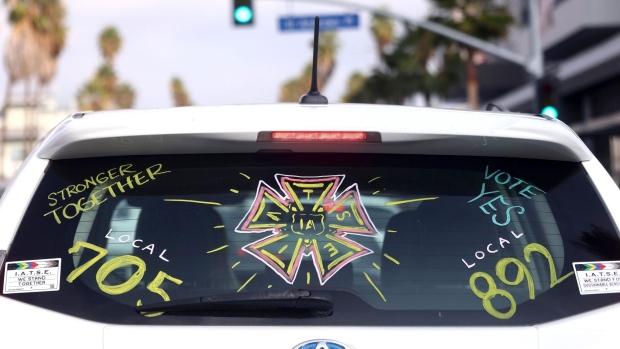 LOS ANGELES, CALIFORNIA - OCTOBER 07: A driver displays their support for the IATSE union on October 07, 2021 in Los Angeles, California. The IATSE union which represents Hollywood’s film and television production crews voted to authorize a strike, calling for better working conditions and higher pay amid a surge in streaming demand. Negotiations are ongoing but a strike may be imminent. (Photo by Mario Tama/Getty Images) , Photographer: Mario Tama/Getty Images North America

(Bloomberg) -- Hollywood studios reached a new labor agreement with one of the industry’s most powerful unions, settling differences over work conditions and pay, and averting a potentially disastrous halt to film and TV production across the country.

A strike would have roiled an industry that’s still reeling from Covid-related closures and health restrictions. Netflix Inc. and Walt Disney Co. have attributed weaker-than-expected growth in online subscriptions to the challenges of getting new programming.

A representative for studios and a spokesman for the International Alliance of Theatrical Stage Employees, which represents thousands of art directors, camera operators and editors, confirmed the agreement was reached Saturday.

The union has been negotiating with the Alliance of Motion Picture and Television Producers, which represents major studios including Disney, Netflix and Amazon.com Inc.

In its 128 years, IATSE has never gone on a nationwide strike. But many workers have faced arduous production schedules that kept them working well into the night and over weekends. IATSE sought shorter hours in a new contract as well as more revenue from streaming services, which were able to pay lower wages under the old contract.

Most of the 60,000 IATSE members are based in Los Angeles and fill behind-the-scenes roles. Three of its chapters are actually national in scope, so a strike would have stopped work across the country, potentially affecting almost 1 million jobs tied to television and film production.