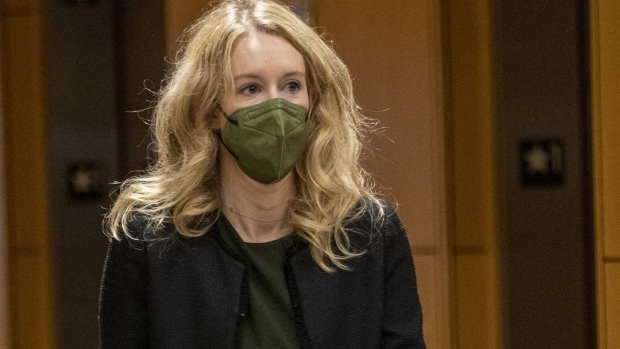 (Bloomberg) -- Elizabeth Holmes began wrapping up her testimony Wednesday in a California federal court, where the Theranos Inc. founder has been on trial since September for alleged fraud after the collapse of her once high-flying startup.

Over more than six days testifying in her own defense, Holmes, 37, has deflected blame, offered regrets and tearfully described a decade of alleged abuse by her former boyfriend, Ramesh “Sunny” Balwani, who was her second-in-command at Theranos. Holmes also said she’d been raped while a student at Stanford.

Prosecutors spent 10 weeks laying out the case against her, claiming the startup she founded was built on lie after lie. Theranos, which peaked at a valuation of $9 billion, collapsed in 2018. Holmes is accused of deceiving investors, board members and companies about the capabilities of Theranos blood-testing devices. She faces as long as 20 years in prison if convicted.

Elizabeth Holmes has resumed her testimony. She is expected to finish a final round of questioning by her lawyer and a prosecutor on Wednesday, which would bring her a step closer to finishing her defense and the start of closing arguments in the case.

The only mystery remaining is whether Holmes will call a mental-health expert to the witness stand to bolster her claims that Balwani manipulated her through sexual and emotional abuse. Balwani is set for a separate trial next year over the same fraud charges Holmes faces and he has denied the abuse allegations.

Court filings indicate that the psychologist Holmes has lined up would testify that “intimate partner abuse” by Balwani over a decade-long relationship led her to trust and defer too much to him. In turn, the government might call its own witness to argue against that theory.

“If there is evidence that the abusive relationship caused her to view facts and make decisions through a lens that Sunny created, that gives the defense a clear avenue to cast doubt on whether Elizabeth had the requisite intent to commit the crimes,” said Mark MacDougall, a former federal prosecutor turned criminal defense lawyer.