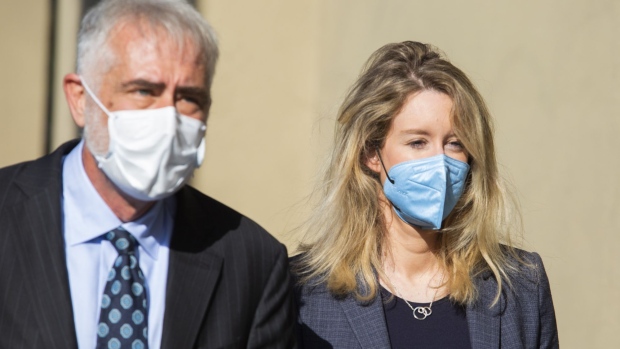 Elizabeth Holmes, founder and former chief executive officer of Theranos Inc., right, exits U.S. federal court in San Jose, California, U.S., on Thursday, May 6, 2021. Holmes and her lawyers appeared in-person Thursday in the federal court where the Theranos founder and former chief executive officer is scheduled to go to trial in August on charges that the blood-test startup once valued at $9 billion was a fraud. , Bloomberg

At a hearing Wednesday, Holmes’s lawyers revived their argument that the government dropped the ball by allowing the company’s Laboratory Information System, or LIS, to go irretrievably dark. Without the patient data it contains, they argue, the founder of the failed blood-testing startup can’t fairly defend herself.

Prosecutors suggested Holmes should be careful what she asks for, arguing that if the LIS data were somehow reproduced in full it would probably further incriminate her.

Wednesday wasn’t the first time Holmes has pointed to the crippled LIS to try to exclude potentially damaging evidence from her trial scheduled to start at the end of August.

“Ms. Holmes has lost the opportunity to refute adequately the government’s assertions with respect to customer complaints and testing results” and regulatory reports, her lawyers said in a court filing. “Evidence of the potentially millions of accurate testing results that resided on the LIS is therefore central to the case and is now missing.”

In response, prosecutors have revealed more information about what they think happened to the database, and laid the blame more squarely on Holmes herself.

Holmes hasn’t been hurt by the loss of the LIS, and to the contrary she “likely benefited from it,” prosecutors said in a court filing. “In fact, the available information strongly suggests that, were the LIS still in existence, its contents would dramatically bolster the government’s allegations.”

The government said it has learned from Adam Rosendorff, the company’s lab director at the time of its clinical launch, that Theranos analyzers failed quality control testing at a rate of up to 20 per cent. Prosecutors contend such data signaled serious problems with Theranos equipment’s accuracy and reliability, undercutting any claim that the contents of the LIS would exonerate Holmes.