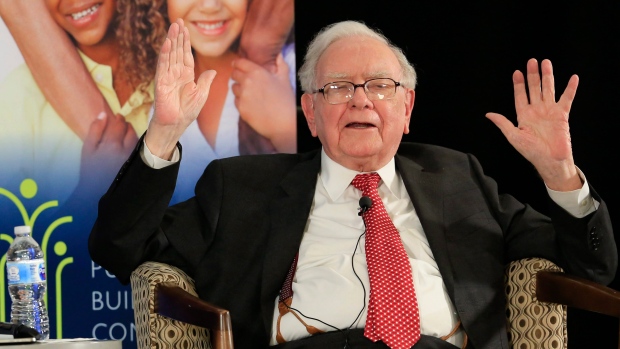 Home Capital Group Inc. debt investors who took a bet on the Canadian mortgage lender when its survival was in doubt are poised to reap the rewards of their gamble.

Bonds of the beleaguered lender fell below 90 cents on the dollar last year and some yields hovered near 16 per cent as the Toronto-based company was engulfed by accusations that its portfolio was tainted by falsified home-loan applications.

Less than 12 months later, the notes are trading close to their original value, thanks in part to a bailout and a $2 billion loan from Warren Buffett’s Berkshire Hathaway Inc. Home Capital is likely to fully repay its $475 million of institutional deposit notes that come due starting in March by tapping into $4.7 billion of liquidity, according to an RBC Capital Markets report.

“We’re comfortable they can address their short-term debt with existing sources of liquidity,” said Darren Arrowsmith, a portfolio manager at CI Investments’ Signature Global Asset Management in Toronto, which bought Home Capital bonds as they sold off. “I’m not sure exactly when they return to the debt market for funding, but they have made great headway in repairing their credibility, are undoubtedly working with banks to replace the existing credit line.”

Home Capital, a lender that underwrites mortgages for people who have trouble qualifying to borrow at Canada’s big banks, saw retail investors rush to pull their deposits last year after a regulator said former executives failed to properly disclose that brokers had been falsifying mortgage applications. After initially saying the allegations were without merit, the company later took full responsibility.

A $153 million equity bailout came in June from Berkshire Hathaway in return for a 20 per cent stake. Home Capital has since changed management, shored up its deposit base and liquidity and started to rebuild its lending business. Buffett’s stake is currently worth about $250 million as Home Capital’s share price traded around $15.52 at 10:07 a.m. in Toronto, up more than 150 per cent from its trough in May.

Damage from the faulty loans has been minimal, as defaults and losses on Home Capital’s mortgage book remained low throughout the saga. Net non-performing loans were 0.28 per cent of gross loans at the end of the third quarter, compared with 0.31 per cent one year earlier, according to its most recent earnings.

Still, mortgage originations have dropped as Canada’s two largest housing markets have cooled in recent months due to new regulations to tamp down on runaway home prices. The company handled $385 million of new mortgages in its most recent quarter, down from $2.5 billion in the third quarter of 2016.

Home Capital worked to improve its disclosure, the key issue that caused 2017’s crisis, by providing daily liquidity updates throughout the summer, which helped shore up investor confidence, Arrowsmith said. Bonds issued by Home Capital’s bank subsidiary maturing in March and December are trading around their issue price, according to data compiled by Bloomberg.

“We have ample liquidity to redeem the notes if we determine that is the best path for the business,” Brad Kotush, chief financial officer of Home Capital, said in emailed statement. “We will announce our intentions in due course.”

The company is facing additional legal claims related to its disclosures after it settled a class-action lawsuit and an action brought by the Ontario Securities Commission.

Home Capital paid off $325 million of deposit notes that matured last May only weeks after the crisis began. It’s reasonable to expect that the company will do so again given that last year’s crisis was always a “terrible equity story” as opposed to issues with its balance sheet, Mark Wisniewski, a credit hedge-fund manager for Ninepoint Partners LP, said by phone from Toronto.

Wisniewski, a longtime Home Capital investor, said he added to his position by scooping up the 2.28 per cent March 2018 notes when they tumbled into the high 70s, on the day the company’s stock plummeted. It’s not necessarily bad for bondholders that Home Capital takes its time building back up its loan origination because it means they’re taking on less risk, he said.

“I actually think they could come back and do a deal in the market,” he said, noting that MCAP Corp., another mortgage lender comparable to Home Capital, sold $200 million of five-year bonds in December. “Their liquidity is improved and the credit environment is incredibly favorable.”