Plunging Canadian housing sales and prices are prompting one of the country’s major financial-industry investors to plow $1.7 billion (US$1.3 billion) into a bet that it won’t be a protracted slump.

Smith’s offer is slightly below where Home Capital was trading a year ago. “We see headwinds in the macro environment right now,” he said in an interview. “So as a result, I think that presented an opportunity to purchase the company.” 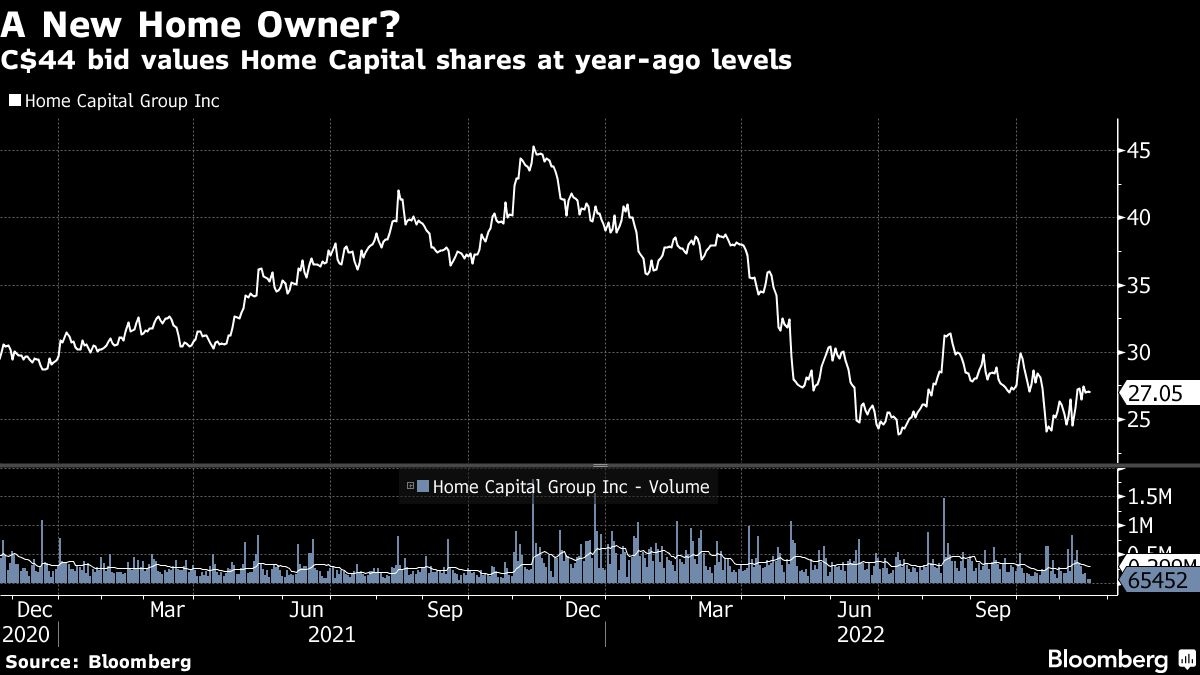 Smith, 71, is no stranger to the peaks and valleys of Canada’s real estate sector. He co-founded mortgage lender First National in 1988, two years before the market took a major downturn. He remains First National’s executive chairman, and his 37 per cent stake in the company is worth about $792 million at today’s prices.

He has also built up a family holding company with a total of $5 billion in assets, including stakes in Fairstone Bank of Canada, Canada Guaranty Mortgage Insurance Co., EQB Inc., Glass Lewis & Co. and private-equity manager Peloton Capital Management.

Smith said he started buying Home Capital shares -- with a view to a possible takeover -- around January and February, when the stock had already begun sliding from its peak as global central banks signaled a turn toward tighter policy.

Home Capital said in August that it had rejected a takeover bid from an unidentified suitor because the price was too low. Smith declined to comment on whether he was that bidder.

The shares got a temporary jolt from that disclosure but soon resumed their decline. The shares surged as much as 59 per cent on Monday and were trading at $42.37 as of 12:54 p.m. Toronto time.

Smith is betting that the market’s turn against mortgage companies is overdone. The health of lenders is more closely correlated to unemployment levels, which determine consumers’ ability to continue paying for their homes, and those remain at historical lows, he said.

Longer-term, Canada’s supply of houses will remain constrained and its high immigration levels will boost demand, helping prices rebound from their current downturn, he said.

The deal would mark the end of decades in the public markets for Home Capital. The company nearly collapsed five years ago amid allegations of misleading shareholders on mortgage fraud and was bailed out by Warren Buffett’s Berkshire Hathaway Inc., which went on to sell its stake at a profit.

Those troubles are “absolutely” behind Home Capital, Smith said, adding that his firm did “extensive” due diligence prior to the purchase.

The deal needs the blessing of two-thirds of Home Capital shareholders as well as regulatory approval, which the companies hope to get by the middle of next year. The agreement includes a go-shop period until Dec. 30 and break fees of $25 million and $50 million, depending on when the deal is broken.

The takeover is being financed with equity from Smith’s holding company as well as debt raised through Royal Bank of Canada, Smith said. He declined to specify the amounts of either portion of the financing.