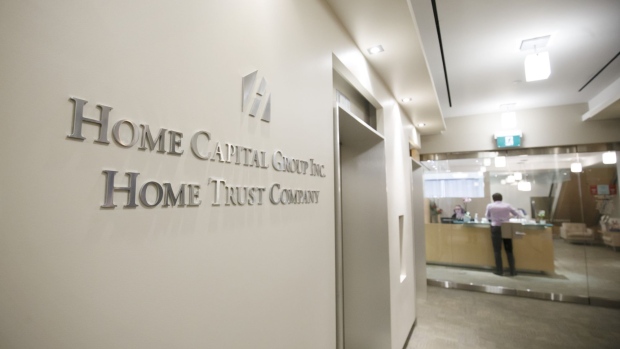 Signage is displayed outside the Home Capital Group Inc. headquarters office in Toronto, Ontario, Canada, on Thursday, May 4, 2017. The downward spiral of Home Capital Group Inc. is rippling across North America as investors and regulators try to piece together the impact it could have on the fastest growing economy in the developed world. Photographer: Cole Burston/Bloomberg , Bloomberg

(Bloomberg) -- Home Capital Group Inc., the Canadian mortgage lender bailed out by Warren Buffett’s Berkshire Hathaway Inc. in 2017, may be open to selling the riskier notes from its future residential mortgage-bond offerings.

Any such sale would be a first for a company that started its securitization program in 2019, Chief Financial Officer Brad Kotush said. Home Capital’s main unit sold earlier this month C$425 million ($341 million) of top-rated residential mortgage bonds from its Classic RMBS Trust, Bloomberg data show.

The Toronto-based firm held onto the riskier class B notes, also known as the subordinated securities, just as it did for the previous two transactions, Kotush said. Selling those notes “may be something that we consider in future transactions,” said Kotush adding that still firm’s main plan for subordinated notes is still to “retain” them. “We really like the product, and RMBS was never a credit mitigation trade for us. It was to develop an alternative source of funding.”

Home Capital on Oct. 12 sold the senior portion of its transaction pooling near-prime mortgages at 0.85 percentage point over government securities, the tightest risk premium since the establishment of its securitization program, even as concerns about over valuation of the housing market in areas such as the Toronto metro area are increasing.

“We don’t have a specific overall view of that sort of macro level of risk in the housing market. We look at each mortgage and underwrite it to our underwriting standards at the time,” Kotush said.

Through Covid, “we did tighten some of our underwriting standards that were already high. And, and now that there’s, I guess, a degree of normalcy compared to spring of 2020, we’re now in a position to go back to some of our previous underwriting” standards.

About 10% of its recent transaction was sold to U.S.-based investors while the remaining securities were placed in Canada, and the order book was more than 2.4 times the amount of debt for sale, he said.

Private-label residential mortgage backed securities in Canada remain a small market compared with corporate bonds, even as the financial industry and regulators including Bank of Canada have been been analyzing ways to grow the number of issuers and investors in the market.

“It would be useful to have more participants, as well as, you know, more issuers would presumably lead to more liquidity and we’d get a virtuous circle,” said Kotush.

Subject to market conditions, Home Capital plans to sell RMBS twice a year, as it has done in 2021.

Regarding potential new forms of borrowing, it might look at environment, social, or governance bond programs said Kotush, adding that this isn’t in their current planning.