Home Capital Group's CEO is telling shareholders his company has "turned the corner" after weathering a run on deposits that pushed the lender to the brink last spring, but the company's performance in the fourth quarter of 2017 illustrates the profound impact on its growth and bottom line.

Home Capital's profit in the last three months of 2017 sank 39.6 per cent to $30.6 million, or 38 cents per share. The company attributes the year-over-year profit erosion to lower loan balances and securitization income.

"We have demonstrated progress towards growing our residential and commercial business lines to more normal and sustainable levels and our employees delivered improved service," CEO Yousry Bissada said in a press release.

"We are entering 2018 with positive momentum in our business," he added. "We have turned the corner and expect to grow from here, responsibly, with sustainable risk management practices embedded in our culture."

Home Capital Group survived a harrowing 2017 that saw its share price collapse as depositors pulled their funds from the alternative lender’s high-interest savings accounts at a blistering pace after the Ontario Securities Commission accused the company and three of its former executives of misleading shareholders in 2015.

The parties involved eventually settled with the regulator, and Home Capital stunned the market last June when it brought Warren Buffett's Berkshire Hathaway into its corner with an emergency credit line and equity investment.

Since the peak of the crisis, Home Capital has undergone a board-level and management overhaul; including appointing Bassada as CEO in July. As of year-end, the company had $12.17 billion in deposits, compared to $15.89 billion a year earlier. 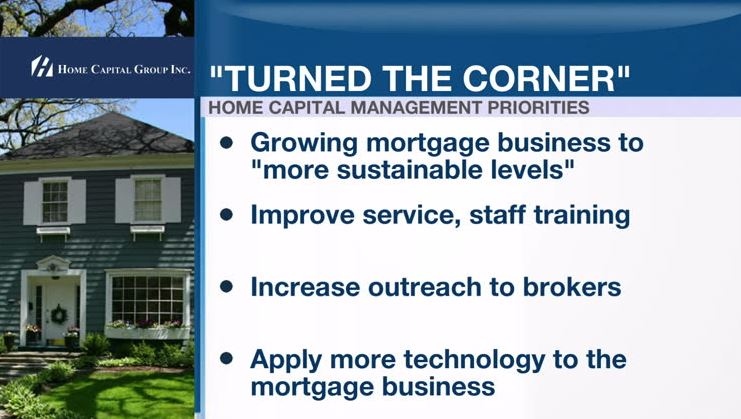 Throughout the turmoil, the lender consistently pointed to a low and stable level of provisions for credit losses. And, indeed, in the fourth quarter that key metric was $3.4 million versus $2.4 million a year earlier, with Home Capital pointing to a single $2.2-million provision on a commercial mortgage as a factor.

Most recently, the company has pledged to rebuild its business more sustainably while attempting to boost market share amid a volatile regulatory environment, including the Office of the Superintendent of Financial Institutions' new guideline for stress-testing uninsured mortgages.

"The company is operating in the context of an evolving regulatory landscape that will affect its primary residential mortgage market, although the extent of any impact is not yet clear," Home Capital said in the earnings release. "Management and the board of directors will continue to assess opportunities for the business as it relates to the current environment during the first and second quarters of 2018."