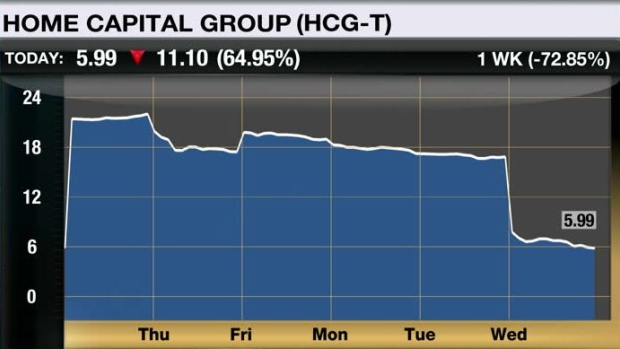 Home Capital Group's (HCG.TO) Home Trust division is lining up a multi-billion-dollar line of credit amid a precipitous outflow from its savings accounts.

The company's shares lost 64.95 per cent of their value on Wednesday, ending the session at $5.99.

The Office of the Superintendent of Financial Institutions (OSFI) told BNN  it does not comment on specific institutions it supervises, but that it maintains ongoing relationships with those institutions and is monitoring the Home Capital situation "closely."

The embattled lender announced early Wednesday Home Trust has a non-binding agreement in principle with an unnamed institutional investor for a $2-billion line of credit to be secured against mortgages. The agreement is expected to be finalized later in the day. Home Trust will have to pay the investor $100 million to tap the line of credit and interest will be charged at 10 per cent on outstanding balances.

“We believe this news could spur other investors and deposit agents to continue redeeming high interest savings accounts and or demand deposits,” wrote National Bank Analyst Jaeme Gloyn in a report to clients. 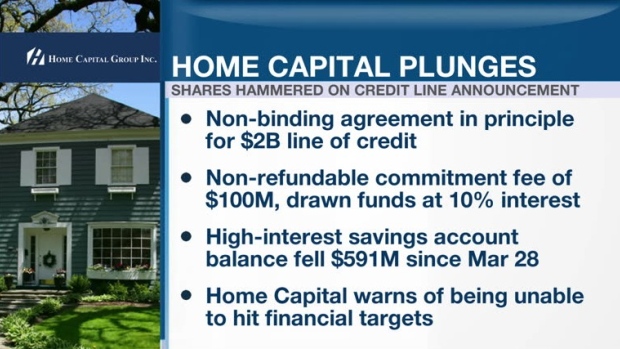 Home Capital said the credit line is intended to “mitigate” a sharp drop in Home Trust’s high-interest savings account balances, which sank by $591 million from March 28 to April 24, at which point the total balance was $1.4 billion. Home Capital warned on Wednesday that further outflows are anticipated.

It’s the latest development in a rapidly-evolving situation. The Ontario Securities Commission alleged on April 19 that Home Capital, along with three of its past and present executives, played various roles in misleading shareholders two years ago. And on Monday, the company announced co-founder and former CEO Gerald Soloway, who was named in the OSC’s statement of allegations, is planning to step down from the board of directors.

Home Capital said on Wednesday the proposed line of credit will have a “material impact” on earnings and that it will now be unable to hit its previous targets.