Proceeds from the sale will bolster its liquidity and trim outstanding debt on a $2 billion emergency facility it agreed with the Healthcare of Ontario Pension Plan (HOOPP) in April.

The expensive bridge financing of $2 billion provided by HOOPP came with an effective interest rate of 22.5 per cent on the first $1 billion drawn down. That affected the company's ability to originate new mortgages since it could not afford to lend money at lower rates than its cost of borrowing.

"The transaction will help the company further stabilize its liquidity position," said Bonita Then, Home Capital's interim chief executive. "Proceeds from the transaction are expected to have an immediate impact by enabling us to enhance our liquidity and reduce the outstanding debt under the company's $2 billion credit facility."

Shares of Home Capital were up 4 per cent in early trading.

The company said gross proceeds from the sale, which is expected to be completed in the third quarter, would be equivalent to 97 per cent of the outstanding value of the mortgages. It expects net cash proceeds of $1.16 billion. 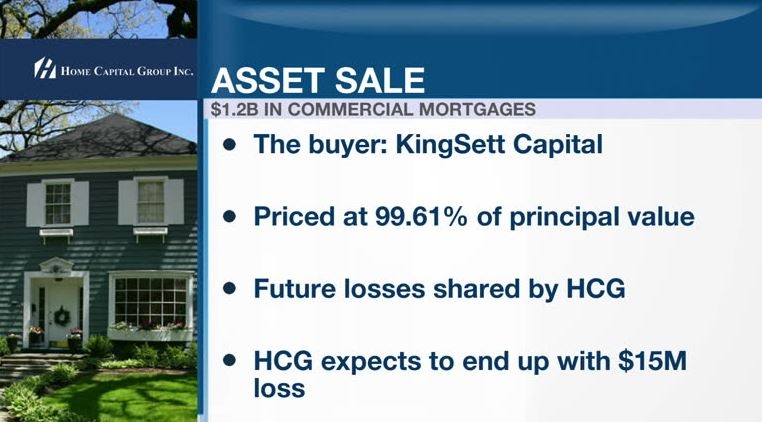 Home Capital had said it was pursuing new financing and strategic options, including the possible sale of some assets.

Depositors have withdrawn 95 per cent of funds from Home Capital's high interest savings accounts since March 27, when the company terminated the employment of former Chief Executive Martin Reid.

Home Capital said last week it agreed a settlement with the OSC and accepted responsibility for misleading investors about problems with its mortgage underwriting procedures.

The company still faces significant hurdles, including finding a permanent chief executive, rebuilding relationships with brokers, and winning back the support of depositors and borrowers.

Top of its priorities is securing long-term financing at a cheaper rate to replace the HOOPP facility.

Last week, Reuters reported Home Capital is in talks with a syndicate of banks, including some of Canada's biggest lenders, to secure a new loan of about $2 billion.