Pullback in housing market won't happen for at least another year: Realosophy president

Home-flippers watched regular buyers parade through open houses and headed for the sidelines, as scarce inventory and rising prices pushed investors out of the housing market.

Flips accounted for 2.7 per cent of U.S. home sales in the first quarter. That was the lowest rate since at least 2000, according to data from Attom. It typically takes about six months to buy, fix and sell a home, so the low rate indicates that flippers accounted for fewer purchases than usual in the second half of 2020. 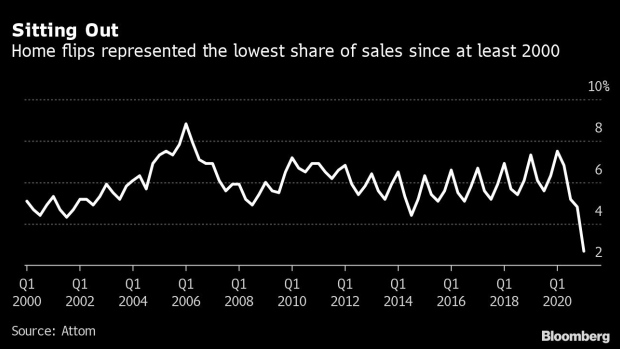 The low flip rates could mean investors were worried that home price appreciation was due to fall off, said Todd Teta, chief product officer at Attom. If that was the case, flippers bet wrong: Home prices surged 16.2 per cent in the first quarter, the largest year-over-year increase on record.

Another possibility is that flippers couldn’t find inventory to bid on, or that rising costs of lumber and other materials changed the economics of renovating homes. Still, traffic to Attom’s websites indicates Americans haven’t given up on the idea of investing in fixer-uppers.

“There’s still a lot of interest in the thought of being a flipper,” Teta said.