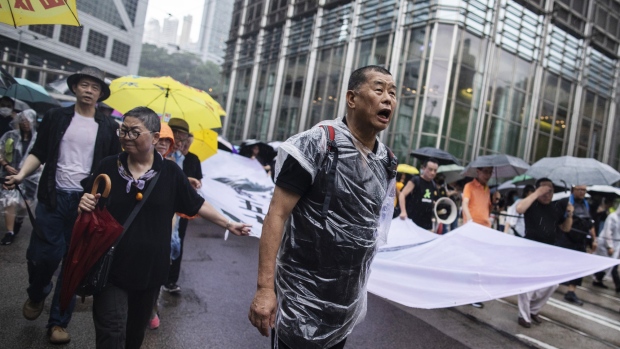 (Bloomberg) -- The home of media tycoon and Hong Kong democracy advocate Jimmy Lai was attacked by firebombs and no one was hurt in the incident, Hong Kong’s Cable TV news reported.

Two masked men threw firebombs at the gate of Lai’s home at around 1 a.m. local time Thursday before leaving, Cable TV news reported people at the scene as saying, adding Lai’s security guard put out the fire and called police.

Police put out a statement concerning a firebomb incident but didn’t mention whose residence was attacked. Police said they received a report from a security guard at the site, saying that the suspects had thrown what are believed to be petrol bombs before fleeing by motorcycle.

Lai, whose publications such as the Apple Daily newspapers have championed Hong Kong’s three-month-old democracy movement, has been labeled a traitor by Chinese state media over the months-long protests in the Asian financial center.

Since protesters took to the streets in June, Apple Daily has been sending people with cameras to the front lines of clashes with police and broadcasting live online from tear gas battles, night vigils, and peaceful marches.

After three months of at-times violent demonstrations, Hong Kong’s leader Carrie Lam made her most significant concession yet on Wednesday evening. In a somber televised address, she told an anxious city that she was meeting a demand from protesters to officially scrap a proposal that ended up sparking the worst unrest since the former colony’s return to Chinese rule in 1997.

To contact the reporter on this story: Dominic Lau in Hong Kong at dlau92@bloomberg.net