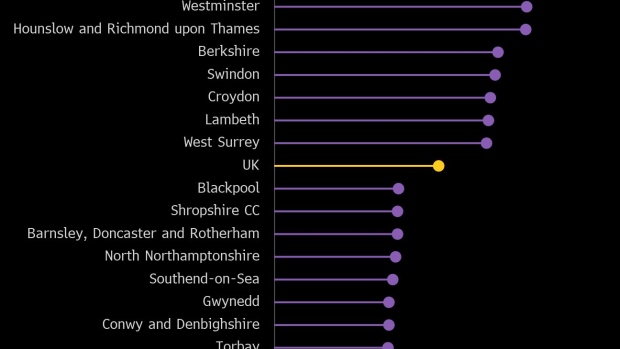 A visitor looks out onto the Canary Wharf financial, business and shopping district in this view from the Sky Garden roof top viewing platform at the top of 20 Fenchurch Street in London, U.K., on Wednesday, July 3, 2019. There are fears that the U.K.'s pending divorce from the European Union, Brexit, will cause a precipitous decline of London as the undisputed financial capital of Europe. , Bloomberg

(Bloomberg) -- The home of the UK financial-services industry produces almost three times more per hour than a district of rural Wales, according to new data that highlight the scale of disparities in British economic performance.

The figures published Wednesday show that almost three quarters of 168 districts had levels of productivity in 2020 that were below the national average.

The underperformance highlights the challenge facing Prime Minister Boris Johnson’s government to “level up” poorer parts of the country, a pledge that has so far yielded few tangible results. Johnson, who won a landslide election victory in 2019, is now fighting for his political survival after a series of high-profile resignations from the government over his leadership.

London’s Tower Hamlets, which includes the Canary Wharf financial district and a thriving business services industry, was the best-performing area with gross value added per hour almost 80% above average, according to the Office for National Statistics.

At the other end of the scale, Powys in mid-Wales, where large numbers of people work in tourism and agriculture, productivity was almost 40% below average.

London and neighboring areas such as Berkshire, Buckinghamshire, Oxfordshire and Surrey dominated the list of the most productive districts. Cheshire in northwest England also ranked highly.

The lowest levels of productivity were typically found in rural or coastal areas, with Cornwall and Isles of Scilly in the southwest around 23% below the UK average despite improvements over the past decade, the ONS said.