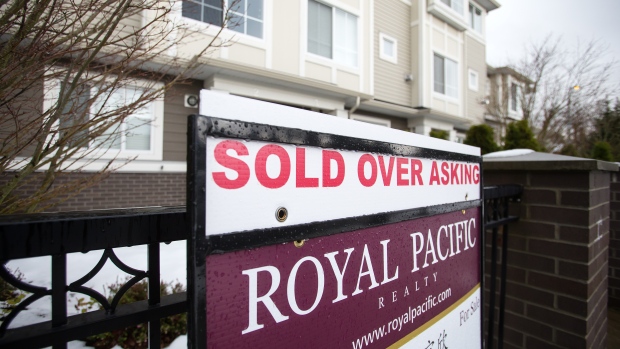 A real estate sign reading "Sold Over Asking" stands on display outside a townhouse in Richmond, British Columbia, Canada, on Sunday, Dec. 11, 2016. , Bloomberg

VANCOUVER - Home sales in British Columbia plummeted last month compared with March of last year, but the B.C. Real Estate Association says the decline was not reflected in prices.

Sales figures released by the association for March show 7,409 homes changed hands last month, a decline of 24.6 per cent over March 2017, while average property prices climbed 5.3 per cent over the same period.

A news release from the association says the average home sold for $726,930 last month and it blames persistently high prices on the lack of properties available for sale.

It says total active listings have changed very little since March of 2017, nudging a 12-year low across B.C.

He is also critical of what he calls the "burdensome" mortgage qualification rules that took effect in January, saying they have had the "predictable effect of swiftly curbing housing demand."