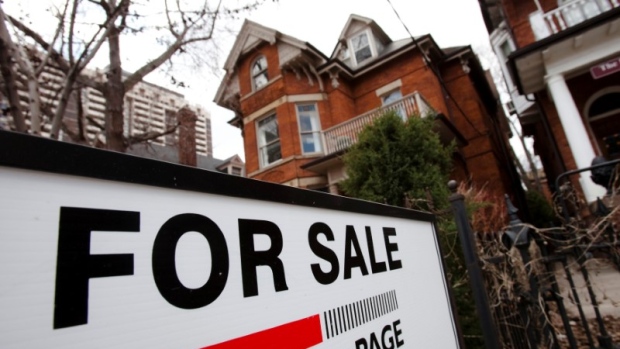 A house is seen for sale on the real estate market in Toronto, Ontario, Canada, April 9, 2009 , Reuters/Mark Blinch

A new survey shows that house prices fell in half of Canada’s key markets in the first quarter of this year from the previous one, but it also suggests the declines will likely be short-lived.

Data from the Royal LePage National House Price Composite showed that the median price of a home in the country increased 6.2 per cent to $605,512 in the first three months of the year, compared to the same period a year ago. But the price also fell 0.3 per cent from the previous quarter.

The declines were led by key markets in the Greater Toronto Area, where the median price fell 2.2 per cent from the last three months of last year to $802,252.

Eroding housing affordability and the impact of government measures introduced this year to restrict mortgage financing were the major reasons for the slump, according to the report.

“We are experiencing a broad-based, residential housing correction in Canada, triggered by federal and provincial intervention,” said Phil Soper, CEO of Royal LePage in the report on Friday.

“Strong house price gains in the first half of 2017 mask some of the recent market shifts when comparing year-over-year home value trends… Regulators were concerned primarily with the large GTA market, and it is there we are seeing the most pronounced short-term changes.”

But Soper goes on to warn that the declines in the market will be short-lived as the tide turns in the second half of the year.

“Those looking for this slowdown to translate into material year-over-year home price drops shouldn’t hold their breath,” he said. “The demand for housing is so strong that the rate of home price appreciation is expected to pick up again in the second half of 2018.”

“While we have recently seen both overshooting and corrections in Canada’s largest markets, on a national basis we believe the Canadian housing market is amidst a long-term expansionary cycle supported by strong economic fundamentals,” he said.

Condominiums across the country continued to see the highest price gains among all housing types surveyed by the study, rising more than 10 per cent from the previous year to $418,245.

Condos in the greater Vancouver area saw the most significant price jump in the first quarter, increasing nearly 20 per cent to a median price of $668,342.

“Housing supply shortages in markets like B.C.’s lower mainland and the GTA remain at the heart of the problem. To avoid a return to the extreme market conditions of over 20 per cent annual home price increases, aggressive multiple offer scenarios and crumbling affordability, there is a need for sensible housing policy focused on creating a sustainable and diversified mix of supply,” said Soper.

“In condominiums, this includes the creation of larger units that are livable for families, especially as the peak millennial generation starts having families in increasing numbers.”