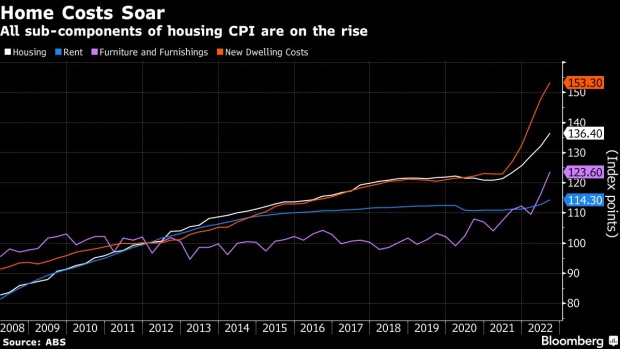 (Bloomberg) -- Australian inflation data this week are set to be pivotal in deciding whether the nation’s policymakers are among the developed world’s first to pause tightening or whether they push interest rates even higher.

Consumer prices probably climbed 7.6% last quarter from a year earlier, the highest since mid-1990, economists predicted ahead of Wednesday’s report. Core inflation — or the trimmed mean gauge — is seen accelerating to 6.5%.

The Reserve Bank holds its first meeting of the year on Feb. 7 and money markets are pricing in a 50-50 chance of a quarter percentage-point rate rise.

Central banks worldwide are considering a downshift in the pace of tightening as price pressures recede from very high levels and fears grow about the impact on economies. While the RBA expects the fourth-quarter result will be the peak in inflation, still rising Australian wages complicate that assessment.

The following four charts show sectors the RBA is likely to focus on.

While property prices in Australia are falling in response to rising rates, housing inflation is hot, with building costs, new dwelling purchases and rents all climbing.

Housing is the biggest group in the CPI basket at just over 22% and a key sub-sector the central bank will be watching is rents. Limited new property supply across most major cities has sent rents soaring, with the return of immigration only compounding demand.

The latest statistics bureau figures will also provide expanded coverage, spanning approximately 480,000 rental properties compared with 4,000 in the series prior to July 2022.

The rapid post-virus recovery in demand for holidays and travel overwhelmed the global aviation industry. As a result, carriers are charging more for tickets, with airlines able to more than double fares on some routes.

On top of that, accommodation and dining out have also become more expensive. All this is feeding into higher costs, with expectations that prices will climb even further as demand from Chinese visitors resumes following Beijing’s abandonment of Covid Zero.

The Recreation and Culture group that covers holidays accounts for almost 11% of the CPI basket.

Global oil prices have come off their peaks in recent months and that’s expected to ease inflation pressure this year. Still, economists estimate gasoline prices in Australia climbed about 2.5% in the three months through December from the prior quarter, partly driven by the September end of a temporary removal of the fuel excise.

Utility prices too are likely to fuel fourth-quarter inflation. Electricity and gas wholesale market prices surged to “record and persistent highs, driven by a perfect storm of supply-side constraints,” according to Australia’s energy regulator. Electricity contract markets suggest those high prices will persist over at least the next two years, it added.

He expects a rebound in childcare prices following the ending of an afterschool care subsidy while recreational services could also pose an “upside risk.”