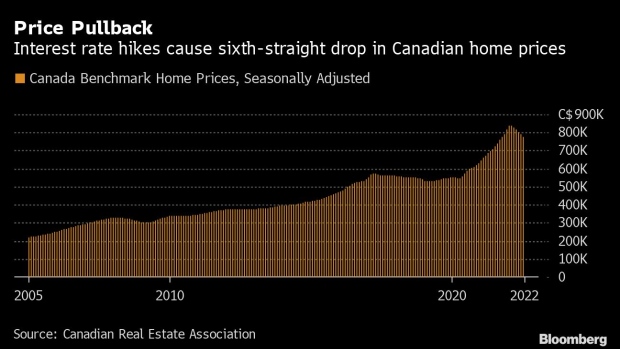 The foundation of a home under construction by Akash Homes in Edmonton, Alberta, Canada, on Tuesday, June 15, 2021. Akash Homes has endured repeated heists of lumber, prompting the company to install security cameras at its construction sites and join forces with other builders on nearby lots to hire guards to patrol overnight and on weekends. , Bloomberg

Benchmark home prices fell 1.6% in August compared with July, to C$777,200 ($589,800), according to data released Thursday by the Canadian Real Estate Association. That brings the cumulative drop from February’s peak to 7.4%.

The Bank of Canada is in the midst of one of its most aggressive rate cycles in its history, raising mortgage costs for prospective homebuyers and chilling Canada’s once-scorching real estate market. The swiftly changing environment and the uncertainty it has spawned has also depressed transactions, with the number of sales down 25% from from a year earlier.

The central bank has increased its policy rate to 3.25% from 0.25% since March, and traders and economists are betting it will hike again next month. That has lifted the interest rate on variable mortgages offered by major lenders including Toronto-Dominion Bank and Royal Bank of Canada to more than 5%.

In response, home prices are falling as economists had expected, with steady declines in most areas and faster pullbacks in the markets that had the biggest run-ups during the Covid-19 pandemic’s ultra-low interest rate environment. That should hearten the Bank of Canada as it continues its tightening campaign, showing that rate increases so far are cooling the market without prompting the forced selling that could provoke a crisis, according to Robert Kavcic, a senior economist at Bank of Montreal.

“Obviously, they’re going to be mindful of how quickly the economy is slowing, how quickly housing is slowing -- they told us as much in the last press statement -- but I don’t think there’s anything here that suggests the market is going off the rails,” Kavcic said in an interview. “So I don’t think it changes their tune at all.”

The price declines have been steepest in the areas of Ontario and British Columbia that had the fastest gains earlier in the pandemic. The biggest drop last month was in Chilliwack, British Columbia, where prices fell 6.5% from July, and Sudbury, Ontario, where they slid 5.3%. Values dropped 1.9% in Greater Toronto and 1% in Montreal.

In British Columbia, on the West Coast, all of the major communities tracked by the real estate association had price declines during the month. East Coast cities including the Halifax-Dartmouth area in Nova Scotia and Fredericton, New Brunswick, also saw losses. Prices were mixed in the prairie provinces, with Calgary and Saskatoon, Saskatchewan, showing slight gains while Edmonton and Winnipeg posted declines.

The slump has taken a bite out of Canadians’ wealth, reducing the value of residential real estate holdings by C$419 billion in the second quarter. Still, households remain much better off than before the pandemic, with that figure still up by C$2.3 trillion over that time, showing most Canadian home owners are still sitting on healthy price gains.

That longer-term trend may be contributing to sellers’ reluctance to list their homes in the current market. Listings decreased in 80% of markets last month, and about 3.5 months of inventory was on the market at the end of August, below the long-term average of about five months, the real estate association said.

The Bank of Canada’s last two rate increases aren’t fully incorporated into the market yet -- let alone further hikes that are planned -- and sellers have yet to fully accept that prices may not rebound immediately, Kavcic said. The Canadian housing price index may decline about 20% from its February peak through mid-2023, he estimates.

“You have kind of a standoff, where a seller comes to the market, can’t get what they want because the market just can’t support the prices that we saw a couple months ago, and they pull the listing,” Kavcic said. “From an affordability perspective, prices have to grind lower, and sellers are going to have to accept that.”