Canadian home prices saw their biggest monthly decline in at least 17 years as the impact of higher interest rates began to spread across the country.

The benchmark price of a home fell 1.9 per cent in June versus the previous month, according to data released Friday by the Canadian Real Estate Association. That’s the third straight month of falling prices, and the biggest one-time drop in data going back to 2005.

With inflation running at the highest level since the early 1980s, the Bank of Canada has rapidly increased the cost of borrowing, boosting its policy rate to 2.5 per cent from 0.25 per cent since the beginning of March. That has caused an abrupt turn in the market as more buyers find themselves unable to secure financing. Sales fell 5.6 per cent on a monthly basis in June.

Greater Toronto, the country’s largest city and the center of its financial industry, has seen benchmark prices fall 4.5 per cent in three months to $1.21 million (about US$928,000). But the declines are steepest in the cities and towns around Toronto that gained the most during the COVID-19 pandemic as people used the freedom of remote work to move further away.

Oakville, a western suburb, has seen a 10 per cent price drop in the last three months, while prices in the city of London, Ontario, about a two-hour drive away, have declined 13 per cent. 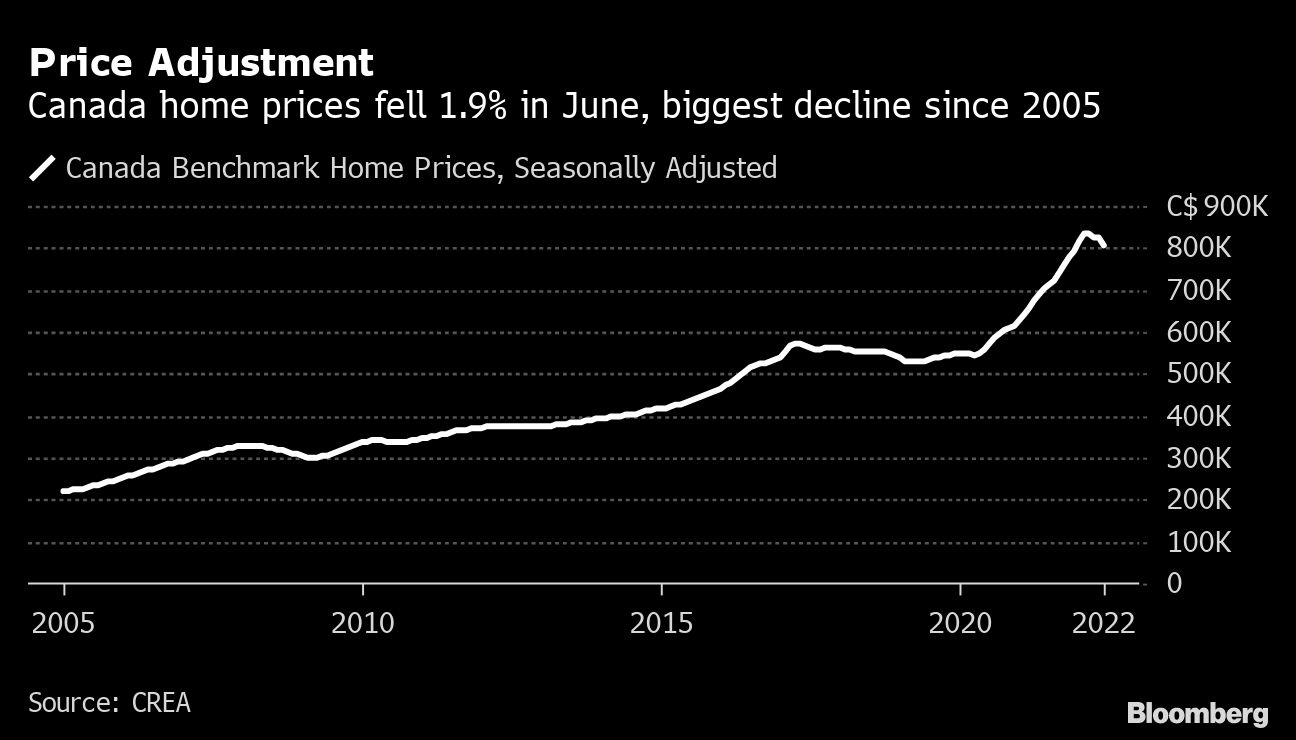 The downturn is becoming more broadly based. In Winnipeg, prices dropped 2.4 per cent in June. They also fell in Vancouver and its outlying suburbs, Edmonton and Halifax.

In Montreal, prices fell 1.3 per cent. “It has slowed down gradually since November,” Daren King, an economist at National Bank of Canada, said in an interview.

The market in Canada’s second-largest city is “a lot less brutal” than some other locations because it’s more affordable and housing supply is still very tight, King said. Even so, the bank forecasts that prices will sink about 10 per cent in Montreal and 15 per cent in Toronto by the end of 2023, he said.

Nationally, the June price decline was an acceleration from the 0.5 per cent drop seen in May and a 1 per cent fall in April.

It’s the first time since 2019 that national home prices have fallen for three consecutive months, though the soft patch is coming after a record-breaking two years for the Canadian housing market in which the benchmark price jumped 50 per cent.